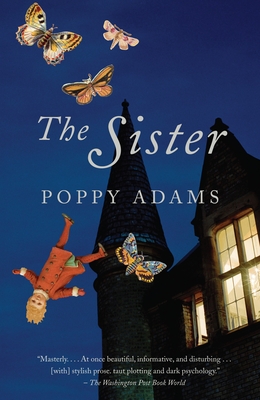 Born into a long line of distinguished lepidopterists, scientists who study moths and butterflies, Ginny and Vivien grew up in a sprawling Victorian home. Forty-seven years later, Ginny lives there alone, tending to her moths and obsessions amid the ghosts of her past.

But when her sister Vivien returns to the crumbling family mansion, dark, unspoken secrets rise, disrupting Ginny's ordered life and threatening the family's fragile peace. Told in Ginny's unforgettable voice, this debut novel tells a disquieting story of two sisters and the ties that bind—sometimes a little too tightly.

Poppy Adams has worked as a documentary filmmaker for the BBC and the Discovery Channel. She lives in London, where she is working on her next book.

“Masterly. . . . At once beautiful, informative, and disturbing . . . [with] stylish prose, taut plotting and dark psychology.” —The Washington Post Book World“Deliciously creepy. . . . Reminds us of A.S. Byatt, Kate Atkinson and Stephen King having a house party.” —The Detroit News"Captivating. . . . The odd characters who make up The Sister are extraordinary, each one more unsettling than the next, and their fractured group portrait is deliciously chilling.” —The Miami Herald“An ideal book for discussion groups, because it prompts analysis with a surprise ending that is both stunning and ambiguous." —Providence Journal"The Sister is powered by the same sort of confidently rendered literary suspense that propelled Donna Tartt's The Secret History onto bestseller lists." —The New York Times“Modern gothic.... A story of science and sexual surrogacy, of Alzheimer's and madness: a tangle of violent emotions and roiling passions.”—The Wall Street Journal"Dark and sinister, The Sister draws you in like a moth to a flame...A wholly satisfying character study with heart throbbing twists that will leave you shuddering."—Chris Stuckenschneider, The Missourian"Suspenseful...Adams creates an engrossing atmosphere of gothic mystery."—The New Yorker"The Sister is an ideal book for discussion groups, because it prompts analysis with a surprise ending that is both stunning and ambiguous."—Mandy Twaddell, The Providence Journal"Adams spins a suspenseful, provocative, deliberately ambiguous tale about decay and disrepair-of people and the bonds between them-and about the harm that comes from even well-intended secrecy and silence."—Laura Collins-Hughes, New York Sun"The great beauty of this splendid first novel lies in Ginny's voice, perfectly clear, controlled and calm...A brilliant narrative performance."—Barbara Fisher, The Boston Globe“Readers will be haunted by this chilling psychological drama.”—Sue Corbett, People"A genuinely eerie thriller...a chilling contemporary gothic."—Margaret Flanagan, Booklist"A chilling and disturbing novel."—Laurel Bliss, Library Journal, starred review"Chilling...an eerie and accomplished debut."—Publishers Weekly "Engrossing."—Kirkus Reviews "Whatever Happened to Baby Jane comes to Devon, in Adams's gothic tale of madness, sibling rivalry and lepidoptera. Adams is a skillful, entertaining storyteller."—The Guardian"This is a dark book, but an extremely funny one, recalling Mark Haddon and Barbara Trapido by turns. A brilliantly paced debut."—Daily Mail"[A] striking debut novel...[The Sister] is also, in its quietly idiosyncratic way, a novel of ideas. When Ginny reflects on the 'analytic and scientific' cast of mind she inherited from her father, it's difficult not to think of Keats and the 'touch of cold philosopy' that 'unweaves' the poetry of natural phenomena. Adams took a risk in deciding to tell her story in the flat, abstracted voice of someone who has devoted her life to a 'little known insect.' But it is a convincing, true voice and it is to Adams's credit that she sustains it as she does."—Financial Times"Cognitive dissonance is what drives the plot, and that makes this quite a bold first novel."—Daily Telegraph"Damaged families, psychological drama and ghosts from the past abound. Adams succeeds in carefully building up an atmosphere of penumbral suspense, creeping towards a tense climax."—Literary Review"[The Sister] is an intricately crafted story, told with just the right balance of claustrophobia and compassion."—Psychologies Magazine"[A] beautifully staged story...mesmerising and unsettling."—Good Housekeeping Book of the Month"The scene is set for sinister secrets and the revival of murderous family tensions. Adams's debut is an atmospheric addition to the 'mess with your head' school of fiction."—Marie Claire, 4 stars“A gothic mystery that hums along on its slow-burning menace, Poppy Adams's The Sister is a sinful box of bonbons: delicious, but you never know what's inside the next bite.”—Andrew Pyper, author of Lost Girls and The Wildfire Season “A taut, tense tale of the ties that bind-sometimes a little too tightly.”—Karin Slaughter“This lyrical and haunting story of two sisters, their troubling past, and the terrible secrets they each want buried will stay with you long after you close the book. A wonderful book loaded with twists and turns that come straight from the heart.”—Harlan Coben
or
Not Currently Available for Direct Purchase
Copyright © 2020 American Booksellers Association