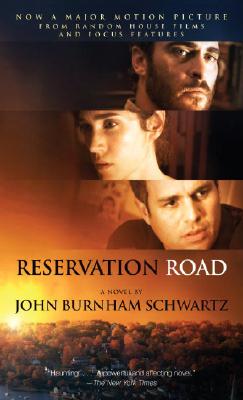 A cycle of violence and retribution is set in motion as two haunted men are engulfed by the emotions surrounding an unexpected and horrendous death.

Ethan, a respected professor at a small New England college, is wracked by an obsession for revenge that threatens to tear his family apart. Dwight, fleeing his crime yet hoping to get caught, wrestles with overwhelming guilt and his sense of obligation to his son. As these two men's lives unravel, Reservation Road moves to its startling conclusion.

“Thrums with suspense and moral ambiguity. . . . This is one of those rare . . . novels that you don't so much read as inhabit and that makes everyday life seem altogether mysterious.”
—Entertainment Weekly

John Burnham Schwartz is the author of "Bicycle Days," "Reservation Road," and "Claire Marvel," all of which have been translated into more than ten languages. His writing has appeared in numerous publications, including "The New York Times," "The New Yorker," "The Boston Globe," and "Vogue." He lives with his wife, filmmaker Aleksandra Crapanzano, in Brooklyn, New York.
Loading...
or
Not Currently Available for Direct Purchase