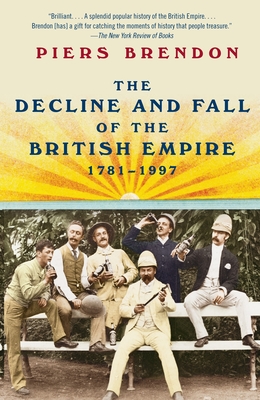 After the American Revolution, the British Empire appeared to be doomed. Yet it grew to become the greatest, most diverse empire the world had seen. Then, within a generation, the mighty structure collapsed, a rapid demise that left an array of dependencies and a contested legacy: at best a sporting spirit, a legal code and a near-universal language; at worst, failed states and internecine strife. The Decline and Fall of the British Empire covers a vast canvas, which Brendon fills with vivid particulars, from brief lives to telling anecdotes to comic episodes to symbolic moments.

Piers Brendon is the author of The Dark Valley, among other histories and biographies. He is the former Keeper of the Churchill Archives Centre and a Fellow of Churchill College, Cambridge. He lives in Cambridge, England.

“Brilliant. . . . A splendid popular history of the British Empire. . . . Brendon [has] a gift for catching the moments of history that people treasure.”
—The New York Review of Books

“Hair-raising. . . . Pointed, sharply drawn, wide in its sweep. . . . Many accounts of the British empire have appeared in recent years, but few are as entertaining as this.”
—Boston Globe

“Entertaining. . . . Lucid and well informed. . . . Every page is consistently readable and stimulating. . . . [Brendon] doesn’t draw a purely bleak picture, or present a bill of indictment. He captures the nuanced relations between the English and the peoples they ruled.”
—The New York Times Book Review

“Splendid. . . . Brendon’s book is history with the nasty bits left in.”
—The Washington Post Book World

“Sharply drawn. . . . A rich panorama of triumph, splendor and folly that is truly global in scale.”
—Newsday

“Only a very confident historian with a massive, comprehensive, and thoroughly researched manuscript would willingly invite comparisons with the British historian Edward Gibbon. [Brendon] fits that bill.”
—Foreign Affairs

“An outstanding book. . . . Compelling reading from start to finish: it is the best one-volume account of the British Empire. . . . At once popular and scholarly, The Decline and Fall of the British Empire demonstrates a thorough command of the historical literature.”
—Times Literary Supplement (London)

“A narrative masterpiece. The settings are exotic, the cast of thousands full of the most eccentric, egotistical, paranoid, swashbuckling players you are likely to meet in any history. . . . Endlessly engrossing and disturbing.”
—The Sunday Telegraph (London)

“[Brendon] spins an epic yarn of heroes, villains, dreamers and fools who risked and often lost their lives to establish and maintain an empire for the glory of the crown; and who often enriched themselves in the process.”
—The Washington Times

“A compelling and spectacularly detailed retelling of imperial ‘rise’ as well as fall. . . . Not since Jan Morris’s Pax Britannica trilogy has anyone recounted these events with such sustained panache. . . . Remarkable.”
—The Guardian (London)

“Magisterial. . . . A huge and hugely impressive book, mighty in scale as its subject, elegantly written and rigorous in its research.”
—The Daily Telegraph (London)

“Readable and highly provocative. . . . This is not a dry, blow-by-blow account of Britain’s impact upon the outside world. . . . This is the story of the British Empire, warts and all.”
—The New York Sun

“While there may be many books on the British Empire, this is undoubtedly the most entertaining and the best. . . .  A book of enormous range and complexity, driven by a powerful narrative engine and leavened with a splendid sense of wit and irony. It takes courage to emulate the great Gibbon, but Brendon succeeds magnificently.”
—The Evening Standard (London)

“Unlike some recent chroniclers of empire, Brendon has no agenda. . . . [This] is, quite simply, a masterpiece of historical narrative. No review can hope to do justice to the depth of Brendon’s research, the balance and originality of his conclusions, or the quality and humour of his prose.”
—Literary Review

“Prodigious. . . . Stuffed with myriad spectacular examples of human vanity, folly, depravity and greed—and is all the better for it. . . . [Brendon] persuasively demonstrates that so much of the contemporary Middle East crisis can be laid at the door of the Foreign Office. . . . A brilliant account.”
—The Observer (London)
or
Buy Here
Copyright © 2020 American Booksellers Association