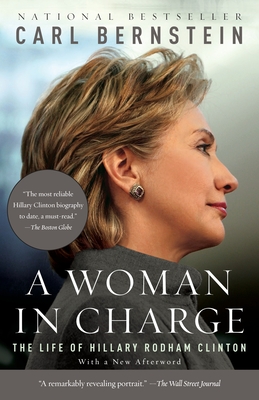 A Woman in Charge

The nuanced, definitive biography of one of the most controversial and widely misunderstood figures of our time: the woman running a historic campaign as the 2016 Democratic presidential nominee—Hillary Rodham Clinton.

Drawing on hundreds of interviews with colleagues and friends and with unique access to campaign records, Pulitzer Prize-winning journalist and bestselling author Carl Bernstein has given us a book that enables us, at last, to address the questions Americans are insistently—even obsessively—asking: Who is she? What is her character? What is her political philosophy? And, what can we expect from Hillary if we elect her President of the United States?


Praise For A Woman in Charge: The Life of Hillary Rodham Clinton…

"The most reliable Hillary Clinton biography to date, a must-read." --The Boston Globe

"The best biography of Hillary Rodham Clinton to date." --Newsday

“A full-scale biography of the former first lady and possible future president. . . . A considerable achievement.” —The Christian Science Monitor

"Engaging and illuminating; it stands as a model of contemporary political biography." —The Los Angeles Times

"[Bernstein] has not lost his reporter's touch. . . . A Woman in Charge has already refocused serious questions--and supplied new information--about Hillary and Bill Clinton, their past behavior and their current ambitions." --The Washington Post Book World

“Bernstein, the famed All the President's Men journalist, is dead solid perfect in his reporting here. . . . The detail and digging on display in A Woman in Charge is stunning.” —The Chicago Sun-Times

“Sprightly written . . . . Insightful in its judgments, and studded with factual nuggets that enhance the Hillary saga.” —Salon

Carl Bernstein, with Bob Woodward, shared a Pulitzer Prize for their coverage of Watergate for The Washington Post. He is the author, with Woodward, of All the President's Men and The Final Days, and, with Marco Politi, of His Holiness: John Paul II and the History of Our Time. He is also the author of Loyalties, a memoir about his parents during McCarthy-era Washington. He has written for Vanity Fair (he is also a contributing editor), Time, USA Today, Rolling Stone, and The New Republic. He was a Washington bureau chief and correspondent for ABC News. He lives with his wife, Christine, in New York.
Loading...
or
Not Currently Available for Direct Purchase