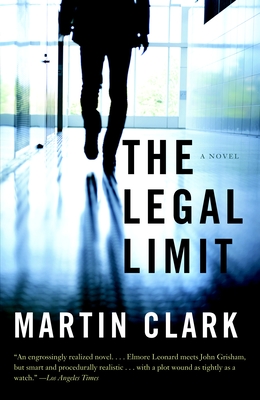 Gates Hunt is a compulsive felon, serving a stiff penitentiary sentence for selling cocaine. His brother, Mason, however, has escaped their bitter, impoverished upbringing to become the commonwealth's attorney for their rural hometown in Virginia, where he enjoys a contented life with his wife and spitfire daughter. But Mason's idyll is abruptly pierced by a wicked tragedy, and soon afterward trouble finds him again when he is forced to confront a brutal secret he and his brother had both sworn to take with them to the grave, a secret that threatens everyone and everything he holds dear.

Intricately plotted and relentlessly entertaining, The Legal Limit is an exploration of the judicial system's roughest edges, as well as a gripping story of murder, family, and the difficult divide that sometimes separates genuine justice from the law.

"An engrossingly realized novel.... Elmore Leonard meets John Grisham, but smart and procedurally realistic with lots of crackling… dialogue and a plot wound as tightly as a watch."

“A model of how to write a literary legal thriller with a wry sense of humor. This is probably the best courthouse story I've ever heard or read.”

“Compelling…. High octane…. Skillfully weaving a plot that includes lie detectors, wiretaps and arcane legal principles, the author creates a world in which family ties can easily turn into nooses.”

“Masterful.... A story of life and death, crime and punishment, sin and redemption, and the chasm that sometimes opens up between the law and justice.”

“An edge-of-your-seat legal thriller.... Take it to the beach and turn its pages breathlessly. Then mull over its deeper themes on that long ride home.”

"Funny, smart and Southern to the bone...[The Legal Limit] packs a wallop...it's so intoxicating that it doesn't just dazzle Clark's reviewers, it inspires them."

"[The Legal Limit] is filled to the brim with creamy, substantive, compelling prose...the manner in which the intricacies of the law, truth, justice and friendship [are] handled is masterful...This is writing at its best."

"With The Legal Limit, Clark has outdone himself again. His novels just keep getting better...He's got the right gifts to draw the raw materials from real life and spin them into well-plotted, beautifully phrased, imaginative works of fiction...Martin Clark is the new standard by which other works of legal fiction should be judged." —Linda Brinson, Winston-Salem Journal

"Clark conveys the joys of small-town life with an eye for detail and the beauty of worn, familiar things."

“Clark’s wise, knowing novel [is] a superb thriller that ponders family, fraternal loyalty, marital love, child rearing, loss, integrity, tolerance, the fault line between law and justice, and even the economic well-being of a community.”

“A masterful mix of legal arcana and white-knuckle suspense.”

“Profound and moving…[Clark’s] most substantial and thought-provoking work to date.”

Martin Clark, a circuit court judge, lives in Stuart, Virginia. His first novel, The Many Aspects of Mobile Home Living, was a New York Times Notable Book, a selection of the Book-of-the-Month Club, a finalist for the Stephen Crane First Fiction Award, and appeared on several best-seller lists.
Loading...
or
Not Currently Available for Direct Purchase