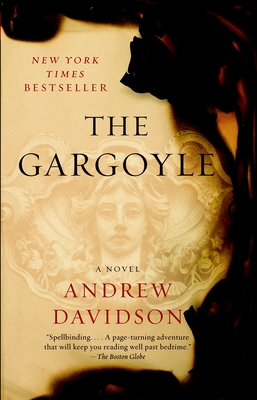 The Gargoyle: the mesmerizing story of one man's descent into personal hell and his quest for salvation.

On a dark road in the middle of the night, a car plunges into a ravine. The driver survives the crash, but his injuries confine him to a hospital burn unit. There the mysterious Marianne Engel, a sculptress of grotesques, enters his life. She insists they were lovers in medieval Germany, when he was a mercenary and she was a scribe in the monastery of Engelthal. As she spins the story of their past lives together, the man's disbelief falters; soon, even the impossible can no longer be dismissed.


Praise For The Gargoyle…

ANDREW DAVIDSON was born in Pinawa, Manitoba, and graduated in 1995 from the University of British Columbia with a B.A. in English literature. He has worked as a teacher in Japan, where he has lived on and off, and as a writer of English lessons for Japanese Web sites. The Gargoyle, the product of seven years' worth of research and composition, is his first book. Davidson lives in Winnipeg, Manitoba.

The Gargoyle begins with arguably one of the most stunning opening scenes in contemporary literature. How was the author able to make horrifying details alluring? What was your initial reaction to these images?

How were you affected by the narrator’s voice and his ability to address you in an intimate, direct monologue? How did his storytelling style compare to Marianne’s? In what ways did these tales balance reality and surrealism?

Arrows form a recurring symbol throughout the novel. What are their various uses as tools of war and of love? What makes them ideal for Marianne’s stories?

What medical aspects of the narrator’s treatment surprised you the most? Did his gruesome journey change the way you feel about your own body?

How did Marianne’s experience of God evolve and mature throughout her life? How do you personally reconcile the concept of a loving God and the reality of human suffering?

Marianne uses her body as a canvas. What messages does it convey? How does the narrator “read” bodies before his accident, both in front of the camera and while picking up less-dazzling strangers?

Discuss the role of ghosts and memory in The Gargoyle. In what ways does the past repeat itself? How are the characters shaped by past circumstances? When are their painful cycles to be broken?

What does Marianne’s copy of The Inferno indicate about the value of books beyond their content? In what way can a book also be an art object, or an artifact of history?

Eventually, Nan reveals her own burn scars. What motivates the novel’s healers–including Nan, Marianne, Sayuri, and Gregor? Whom does the narrator heal?

Discuss the role of money throughout The Gargoyle. What kept Jack honest? What did it mean for Marianne, a woman, to have far more money than the men in her life, both in the 14th century and in the contemporary storyline?

How did you interpret the narrator’s own Dante-esque tour, described in Chapter Twenty-nine? Was he hallucinating, in the throes of withdrawal while he kicked the bitchsnake of morphine, or did he journey to an underworld? Or both? Was Marianne a mere mortal?

The novel closes with Marianne’s departure and the marriage of Gregor and Sayuri. The narrator grapples with guilt, trying to understand whether he could or should have saved Marianne. What enabled Gregor and Sayuri to recognize and nurture their love for one another? What determines whether a relationship will become exhausted or perpetually revitalized? Is fate or willpower the greater factor?