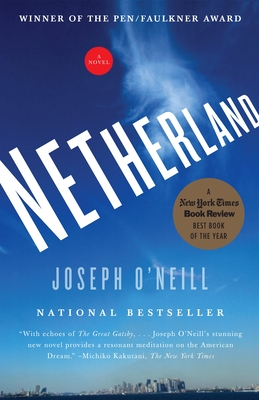 A NEW YORK TIMES BOOK REVIEW BEST BOOK OF THE YEAR • WINNER OF THE PEN/FAULKNER AWARD • "Netherland tells the fragmented story of a man in exile—from home, family and, most poignantly, from himself.” —Washington Post Book World

In a New York City made phantasmagorical by the events of 9/11, and left alone after his English wife and son return to London, Hans van den Broek stumbles upon the vibrant New York subculture of cricket, where he revisits his lost childhood and, thanks to a friendship with a charismatic and charming Trinidadian named Chuck Ramkissoon, begins to reconnect with his life and his adopted country. As the two men share their vastly different experiences of contemporary immigrant life in America, an unforgettable portrait emerges of an "other" New York populated by immigrants and strivers of every race and nationality.

“Stunning . . . with echoes of The Great Gatsby, Fitzgerald's masterpiece . . . a resonant meditation on the American Dream.” —Michiko Kakutani, The New York Times

“Exquisitely written. . . . A large fictional achievement, and one of the most remarkable post-colonial books I have ever read. . . . Netherland has a deep human wisdom.” —James Wood, The New Yorker

“I devoured it in three thirsty gulps, gulps that satisfied a craving I didn't know I had. . . . It has more life inside it than ten very good novels.” —Dwight Garner, The New York Times Book Review

“Elegant.... Always sensitive and intelligent, Netherland tells the fragmented story of a man in exile—from home, family and, most poignantly, from himself.” —Washington Post Book World

“Suspenseful, artful, psychologically pitch-perfect, and a wonderful read.... Joseph O'Neill has managed to paint the most famous city in the world, and the most familiar concept in the world (love) in an entirely new way” —Jonathan Safran Foer author of Everything is Illuminated

“Brilliant.... A post–9/11 novel that takes us closer to understanding the emotional wreckage.” —GQ

"O'Neill writes a prose of Banvillean grace and beauty, shimmering with truthfulness, as poised as it is unsettling. He is a master of the long sentence, of the half-missed moment, of the strange archaeology of the troubled marriage. Many have tried to write a great American novel. Joseph O'Neill has succeeded." —Joseph O'Connor, author of Star of the Sea

"Somewhere between the towns of Saul Bellow and Ian McEwan, O'Neill has pitched his miraculous tent. Netherland is a novel about provisionality, marginality; its registers are many, one of the most potent being its extremely grown-up nostalgia. The dominant sense is of aftermath, things flying off under the impulse of an unwanted explosion, and the human voice calling everything back." —Sebastian Barry, author of A Long Long Way

Joseph O’Neill was born in Cork, Ireland, in 1964 and grew up in Mozambique, South Africa, Iran, Turkey, and Holland. His previous works include the novels This Is the Life and The Breezes and the nonfiction book Blood-Dark Track, a family history centered on the mysterious imprisonment of both his grandfathers during World War II, which was a New York Times Notable Book. He writes regularly for The Atlantic Monthly. He lives with his family in New York City.
Loading...
or support indie stores by buying on