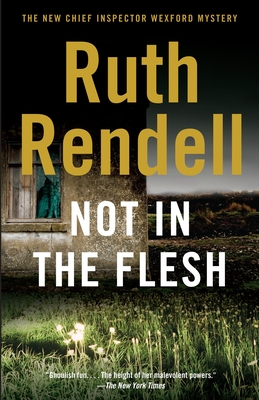 Not in the Flesh (Inspector Wexford #21)

After a truffle-hunting dog unearths a human hand instead of a precious fungus, Chief Inspector Wexford and his team proceed to interrogate everyone who lives nearby to see if they can turn up a match for the errant appendage among the eighty-five people who have disappeared over the past decade in this part of England. Then, when a second body is discovered nearby, Wexford experiences a feeling that's become a rarity for the veteran policeman: surprise. As Wexford painstakingly moves to resolve these multiple mysteries, long-buried secrets are brought to daylight, and Ruth Rendell once again proves why she has been hailed as our greatest living mystery writer.

Praise For Not in the Flesh (Inspector Wexford #21)…

“Ghoulish fun.... The height of her malevolent powers. Rendell can do whatever she likes and still get away with it.” —The New York Times“Vivid and witty. Wexford is his usual smart, compassionate self as he unravels a web of lies and deception larger than any of the characters realize.” —Los Angeles Times“To call Ruth Rendell prolific is akin to calling the Grand Canyon a slight dip in the landscape. . . . Not in the Flesh is the work of a writer who continues to command respect and satisfy her legion of writers.” —Richmond Times-Dispatch“The unflappable detective still hasn’t worn out his welcome.... A fine example of Rendell’s sharp writing, intelligence, and humanity.”—The Christian Science Monitor“In the best whodunit tradition, Rendell advances her plot through surprises...so shocking they dash all calculations.”—The New York Times Book Review

RUTH RENDELL has won numerous awards, including three Edgars, the highest accolade from Mystery Writers of America, as well as three Gold Daggers, a Silver Dagger, and a Diamond Dagger for outstanding contribution to the genre from England’s prestigious Crime Writer’s Association. A member of the House of Lords, she lives in London.
Loading...
or
Not Currently Available for Direct Purchase