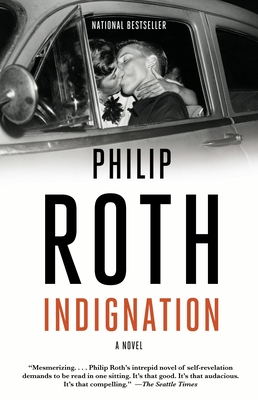 In 1951, the second year of the Korean War, a studious, law-abiding, and intense youngster from Newark, New Jersey, Marcus Messner, begins his sophomore year on the pastoral, conservative campus of Ohio's Winesburg College. And why is he there and not at a local college in Newark where he originally enrolled? Because his father, the sturdy, hardworking neighborhood butcher, seems to have gone mad– mad with fear and apprehension of the dangers of adult life, the dangers of the world, the dangers he sees in every corner for his beloved boy. Far from Newark, Marcus has to find his way amid the customs and constrictions of another American world.

Indignation, Philip Roth's twenty-ninth book, is a startling departure from the haunted narratives of old age and experience in Roth’s recent books and a powerful exploration of a remarkable moment in American history.

“As always, the prose is well built– sinewy and graceful–and, as always, the wit is as sharp as a German knife. There are simply no novels by Roth in which you cannot detect the hand of a master.” – O, The Oprah Magazine

“The interplay between a life just begun and ended, impulse and reflection, college high jinks and eternity is what makes it resonate.”  – People, 4 out of 4 stars

“Roth, blending the bawdy exuberance of his early period and the disenchantment of his recent work, demonstrates with subtle mastery, the 'incomprehensible way one's most banal, incidental, even comical choices achieve the most disproportionate result'.” –The New Yorker