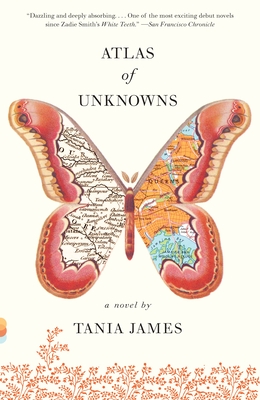 “Linno loves to draw pictures while Anju believes in hard work and education. The sisters are the apples of their father's eye. The vines in the limbs of the family tree can grow tangled with secrets and misunderstandings, but the bond between the sisters is deep. When Anju wins a scholarship to the U.S., those bonds are tested. The writing in Tania James' debut novel is beautiful, funny, engaging, heartbreaking, and alive.”
— Deon Stonehouse, Sunriver Books, Sunriver, OR
View the List

An utterly irresistible first novel: The story of two sisters, the yearning to disappear into another country, and the powerful desire to return to the known world. Linno is a gifted artist, despite a childhood accident that has left her badly maimed, and Anju is one of Kerala’s most promising students. Both girls dream of coming to the United States, but it is Anju who wins a scholarship to a prestigious school in New York. She seizes it, even though it means lying and betraying her sister. When her lie is discovered, Anju disappears. Back in Kerala, Linno is undergoing a transformation of her own. But when she learns of Anju’s disappearance, Linno strikes out farther still, with a scheme to procure a visa so that she can come to America to look for her sister and save them both.

“Dazzling and deeply absorbing. . . . One of the most exciting debut novels since Zadie Smith’s White Teeth.” —San Francisco Chronicle

“Delightful. . . . James writes with poise, sly humor, and an acuity both cultural and sensuous. . . . The characters’ love for one other radiates off the page.” —The New York Times Book Review

“Wise and hilarious. . . . An astonishment of a debut, so radiant with life, with love, with good old human struggle that I had trouble detaching myself from its pages. . . . Tania James comes at you like everyone you’ve ever cared about, like everyone you’ve ever lost. . . . Her prevaricating bikini-waxing husband-dodging beautiful-crazy sisters followed me into my day, into my dreams. Take this book from someone, give it to someone—you will not go wrong. Atlas is that damned good.” —Junot Diaz, author of The Brief Wondrous Life of Oscar Wao

“A beguiling tale of treachery and remorse. . . . James is a perceptive writer whose insights into immigration, American life and Indian customs enrich this appealing tale.” —Richmond Times-Dispatch

“Reminiscent of Pulitzer prize-winner Jhumpa Lahiri, this delightful debut is an insightful study of leave-taking and homecoming.” —Daily Mail (London)

“James brings a dazzling array of writerly skills to her debut novel. . . . She has a tender heart that feels for [her characters’] idiosyncrasies and yearnings, a sharp ear for dialogue, and an eye for the details of landscape and setting.” —The Washington Times

“Tania James maps her characters’ yearnings and missteps with the skills of a seasoned cartographer. Dazzling, original, witty, and poignant, [this] is one of the most beguiling first novels I’ve read in years.” —Ann Packer, author of The Dive from Clausen’s Pier

“Not your standard growing-up-in-India story. . . . James has concocted a charming seriocomic blend of individuals, cultures and expectations in which every component retains its individuality.” —The Star-Ledger (Newark)

“Warm, beguiling, refreshingly smart. . . . A great strength of James’ novel is the depth and vibrancy of her characters. She treats them with dignity, never withdrawing the possibility of redemption, and even the most marginal figures turn out to be mysterious, surprising creatures.” —The New Leader

“With Atlas of Unknowns, Tania James proves herself a natural-born storyteller—she’s the real deal.” —Nathan Englander, author of For the Relief of Unbearable Urges

“Painted with exquisite imagery. . . . Lines read as if they are extracted from poems, creating a story that is not only entertaining but a true piece of art.” —The Missourian

“One of the most engaging literary reads of the year. . . . James has made a brilliant debut, one which will be remembered for a long time.” —Business World (India)

“As spectacular a debut as any author could hope for. . . . With keen insight and seminal prose James has fashioned a Bildungsroman of a family saga. . . . The breadth and depth of Atlas of Unknowns indicates that its author is as wise beyond her years as she is gifted.” —The Courier-Journal (Louisville)

“A powerful and nuanced debut. . . . Tania James paints the dual worlds of the novel—India and America—with masterful care, choosing beautiful, shocking details, and peopling them with characters we will remember long after closing the book.” —Chitra Divakaruni, author of Mistress of Spices

“A brilliant panorama of the human condition. . . . An unputdownable page-turner. So assured is the narration, so finished the skill, that you keep reminding yourself it is the work of a first time novelist. . . . James stands out for her unique voice and imaginative narration.” —India Abroad (New York)

“An intricate narrative that explores the nature of immigration and also the price paid by women struggling to find their place in the world. Share this book with your mother, your sister, your friend—they will thank you for it.” —Hannah Tinti, author of The Good Thief

Tania James was raised in Louisville, Kentucky, and is a graduate of Harvard and Columbia universities. She has published her work in One Story and The New York Times. She lives in New York City.

www.taniajames.com
Loading...
or support indie stores by buying on
(This book is on backorder)