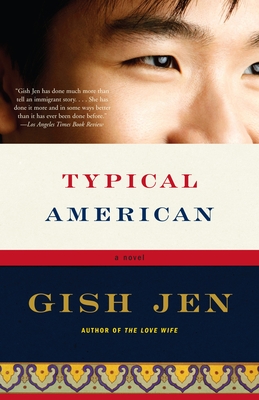 From the beloved author of Mona in the Promised Land and The Love Wife comes this comic masterpiece, an insightful novel of immigrants experiencing the triumphs and trials of American life.

Gish Jen reinvents the American immigrant story through the Chang family, who first come to the United States with no intention of staying. When the Communists assume control of China in 1949, though, Ralph Chang, his sister Theresa, and his wife Helen, find themselves in a crisis. At first, they cling to their old-world ideas of themselves.  But as they begin to dream the American dream of self-invention, they move poignantly and ironically from people who disparage all that is “typical American” to people who might be seen as typically American themselves. With droll humor and a deep empathy for her characters, Gish Jen creates here a superbly engrossing story that resonates with wit and wisdom even as it challenges the reader to reconsider what a typical American might be today.

“Gish Jen has done much more than tell an immigrant story. . . . She has done it more and in some ways better than it has ever been done before.” —Los Angeles Times Book Review

“No paraphrase could capture the intelligence of Gish Jen’s prose, its epigrammatic sweep and swiftness. . . . The author just keeps coming at you line after stunning line.” —The New York Times Book Review

Gish Jen is the author of four novels, a book of stories, and two books of nonfiction, The Girl at the Baggage Claim and Tiger Writing. Her honors include the Lannan Literary Award for fiction and the Mildred and Harold Strauss Living Award from the American Academy of Arts & Sciences. She teaches from time to time in China and otherwise lives with her husband and two children in Cambridge, Massachusetts.