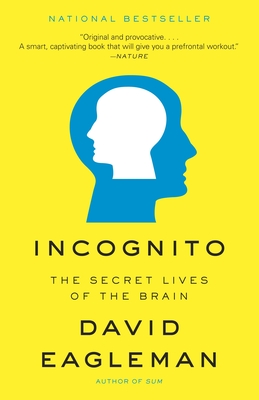 In this sparkling and provocative book, renowned neuroscientist David Eagleman navigates the depths of the subconscious brain to illuminate its surprising mysteries. Why can your foot move halfway to the brake pedal before you become consciously aware of danger ahead? Is there a true Mel Gibson? How is your brain like a conflicted democracy engaged in civil war? What do Odysseus and the subprime mortgage meltdown have in common? Why are people whose names begin with J more like to marry other people whose names begin with J? And why is it so difficult to keep a secret?


Praise For Incognito: The Secret Lives of the Brain…

“Original and provocative. . . . A smart, captivating book that will give you a prefrontal workout.”
—Nature

“A popularizer of impressive gusto . . . [Eagleman] aims, grandly, to do for the study of the mind what Copernicus did for the study of the stars. . . . Incognito proposes a grand new account of the relationship between consciousness and the brain. It is full of dazzling ideas, as it is chockablock with facts and instances.”
—The New York Observer

“Eagleman engagingly sums up recent discoveries about the unconscious processes that dominate our mental life. . . . [He] is the kind of guy who really does make being a neuroscientist look like fun.”
—The New York Times

“Although Incognito is fast-paced, mind-bending stuff, it’s a book for regular folks. Eagleman does a brilliant job refining heavy science into a compelling read. He is a gifted writer.”
—Houston Chronicle

“Eagleman has a talent for testing the untestable, for taking seemingly sophomoric notions and using them to nail down the slippery stuff of consciousness.”
—The New Yorker

“Incognito does the right thing by diving straight into the deep end and trying to swim. Eagleman, by imagining the future so vividly, puts into relief just how challenging neuroscience is, and will be.”
—The Boston Globe

“Your mind is an elaborate trick, and mastermind David Eagleman explains how the trick works with great lucidity and amazement. Your mind will thank you.”
—Wired

“A fun read by a smart person for smart people. . . . It will attract a new generation to ponder their inner workings.”
—New Scientist

“Fascinating. . . . Eagleman has the ability to turn hard science and jargon into interesting and relatable prose, illuminating the mind’s processes with clever analogies and metaphors.”
—Salt Lake City Weekly

“Touches on some of the more intriguing cul-de-sacs of human behavior.”
—Santa Cruz Sentinel

“Startling. . . . It’s a book that will leave you looking at yourself—and the world—differently.”
—Austin American-Statesman

“Sparkling and provocative. . . . A thrilling subsurface exploration of the mind and all its contradictions.”
—The Courier-Journal

“After you read Eagleman’s breezy treatment of the brain, you will marvel at how much is illusory that we think is real, and how we sometimes function on autopilot without consciously knowing what is happening. . . . This is a fascinating book.”
—The Advocate

“A pleasure to read. . . . If a reader is looking for a fun but illuminating read, Incognito is a good choice. With its nice balance between hard science and entertaining anecdotes, it is a good alternative to the usual brainless summer blockbusters.”
—Deseret News

“Incognito is fun to read, full of neat factoids and clever experiments. . . . Eagleman says he’s looking to do for neuroscience what Carl Sagan did for astrophysics, and he’s already on his way.”
—Texas Monthly

“Eagleman presents difficult neuroscience concepts in an energetic, casual voice with plenty of analogies and examples to ensure that what could easily be an overwhelming catalog of facts remains engaging and accessible. . . . The ideas in Eagleman’s book are well-articulated and entertaining, elucidated with the intelligent, casual tone of an enthusiastic university lecturer.”
—TheMillions.com

“Written in clear, precise language, the book is sure to appeal to readers with an interest in psychology and the human mind, but it will also please people who just want to know, with a little more clarity, what is going on inside their own skulls.”
—Booklist

“A stunning exploration of the we behind the I. Eagleman reveals, with his typical grace and eloquence, all the neural magic tricks behind the cognitive illusion we call reality.”
—Jonah Lehrer, author of How We Decide

“A fascinating, dynamic, faceted look under the hood of the conscious mind. . . . Equal parts entertaining and illuminating, the case studies, examples and insights in Incognito are more than mere talking points to impressed at the next dinner party, poised instead to radically shift your understanding of the world, other people, and your own mind.”
—Brain Pickings

“Fascinating. . . . Eagleman has the ability to turn hard science and jargon into interesting and relatable prose, illuminating the mind’s processes with clever analogies and metaphors.”
—Salt Lake City Weekly

“One of those books that could change everything.”
—Sam Snyder, blog

“Buy this book. The pithy observations, breezy language and wow-inducing anecdotes provide temporary pleasure, but the book’s real strength is in its staying power.“
—Science News

“A whirlwind, high-definition look at the neural underpinnings of our everyday thinking and perception . . . fascinating.”
—Brettworks.com

“Eagleman embodies what is fascinating, fun, and hopeful about modern neuroscience.”
—Brainstorm.com

“After you read Eagleman’s breezy treatment of the brain, you will marvel at how much is illusory that we think is real, and how we sometimes function out autopilot without consciously knowing what is happening. . . . This is a fascinating book.”
—The Advocate

“Funny, gripping and often shocking . . . Eagleman writes great sentences of the sort that you might be inclined to read to those in your general vicinity.”
—bookotron.com

“Incognito reads like a series of fascinating vignettes, offering plenty of pauses for self-reflection. Eagleman’s anecdotes are funny and easily tie to the concepts he explains. Moreover, his enthusiasm for the subject is obvious and contagious.”
—Spectrum Culture