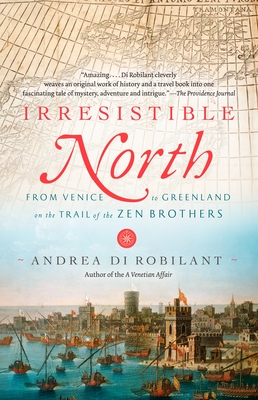 From Venice to Greenland on the Trail of the Zen Brothers

A century before Columbus arrived in America, two brothers from Venice are said to have explored parts of the New World. They became legends during the Renaissance, and then the source of a great scandal that would discredit their story. Today, they have been largely forgotten.

In this very original work—part history, part travelogue—Andrea di Robilant chronicles his discovery of a travel narrative published in 1558 by the Venetian statesman Nicolò Zen. The text and its fascinating nautical map re-created the travels of two of the author’s ancestors, brothers who claimed to have explored the North Atlantic in the 1380s and 1390s. Di Robilant sets out to discover why the Zens’ account later came under attack as one of the greatest frauds in geographical history. Was their map—and even their journey—partially or perhaps entirely faked?


Praise For Irresistible North: From Venice to Greenland on the Trail of the Zen Brothers…

“Captivating. . . . Di Robilant cleverly weaves an original work of history and a travel book into one fascinating tale of mystery, adventure and intrigue.”
—Providence Journal

“Di Robilant has a flair for the evocative detail. . . . His willingness to travel to places far off the beaten path enlivens his account, giving it forward momentum.”
—Los Angeles Times

“While historians and cartographers will continue their challenges, readers will be intrigued and perhaps convinced by this very readable account.”
—The Washington Times

Andrea di Robilant was born in Italy and educated at Columbia University, where he specialized in international affairs. He is the author of two previous books, A Venetian Affair and Lucia: A Venetian Life in the Age of Napoleon. He currently lives in Rome with his wife and two sons.