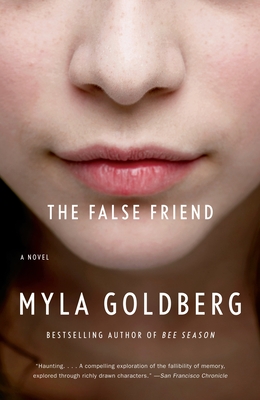 “Arrested by a childhood memory triggered 21 years later, Celia Durst decides it's time to tell the truth about her part in the events that led to the disappearance of her childhood friend Djuna. After telling her overwhelmed partner, Huck, she goes home to confess her lie to her parents, her friend's mother, and the other girls who formed their clique. No one believes her new version of events. Goldberg does not shy away from the cruelties that strong girls inflict on their prey. Each character pushes Celia to acknowledge truths she'd rather not know. The ending, in all its perfect brevity, will keep you awake, hoping that Celia can go back to her life.”
— Helen Sinoradzki, Annie Bloom's Books, Portland, OR
View the List

Twenty years after Celia’s best friend, Djuna, went missing, memories of that terrible day come rushing back—including the lie Celia remembers having told to conceal her role in Djuna’s disappearance. But when Celia returns to her hometown to confess the truth, her family and childhood friends recall that day very differently. As Celia learns more about what may or may not have happened, she becomes increasingly uncertain whom she should trust.

In The False Friend, Myla Goldberg—bestselling author of Bee Season—brilliantly explores the cruelty of children, the unreliability of memory, and the unpredictable forces that shape our adult selves.


Praise For The False Friend…

“Suspenseful and smart. . . . A timely take on the fraught emotional terrain of American schoolgirls.”
—People

“Fascinating and fresh. . . . Written with psychological shrewdness, generosity and a sure hand.”
—The Washington Post

“Goldberg’s intelligence and psychological acuity are evident on every page. . . . She’s a smart, witty, highly observant writer, and in her latest, the author’s prose is as exceptional as ever.”
—The Dallas Morning News

“Cinematically weaving together Celia’s uneasy present with her disturbing past, Goldberg explores the intensity and volatility of friendships between young girls as well as the slipperiness of fidelity and memory.”
—The Village Voice

“Goldberg does a scarily fine job describing the mean dynamic in a clique of five 11-year-olds. . . . Tense and marvelous.”
—Entertainment Weekly

“There is nothing as obsessive and cruel as the intimate friendships of young girls. Myla Goldberg’s magnificent new novel mines this terrifying but exhilarating territory with precision, insight, and honesty.”
—Ayelet Waldman, author of Red Hook Road and Bad Mother

“Wondrous. . . . A constantly surprising story. . . . Goldberg draws readers into a world in which people don’t have single, lifelong identities. They morph.”
—The Asheville Citizen-Times (North Carolina)

“Captivating. . . . Pitch perfect. . . . An irresistible story of a woman trying to reconcile her ever-warping memories, memories that ultimately are proven to be the most ‘False Friend’ of all.”
—Chattanooga Times Free Press (Tennessee)

“Celia’s journey causes us to examine the impact of our words and deeds, the reliability of our memories, and how these things shape the people we ultimately grow to be.”
—Bay City Times (Michigan)

“The term mean girls is elevated to a new level in Goldberg’s moody novel. . . . This is a layered, understated novel about the complex, ambiguous nature of memory and its effect on the dynamics of relationships. Great fodder for reading groups.”
—Library Journal (starred review)

Myla Goldberg is the author of several books, including Wickett’s Remedy and the bestselling, critically acclaimed Bee Season, which was widely translated and adapted to film. She lives in Brooklyn, New York.