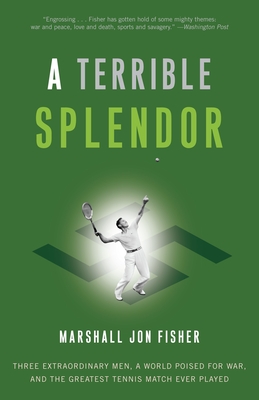 Three Extraordinary Men, a World Poised for War, and the Greatest Tennis Match Ever Played

Before Federer versus Nadal, before Borg versus McEnroe, the greatest tennis match ever played pitted the dominant Don Budge against the seductively handsome Baron Gottfried von Cramm. This deciding 1937 Davis Cup match, played on the hallowed grounds of Wimbledon, was a battle of titans: the world's number one tennis player against the number two; America against Germany; democracy against fascism. For five superhuman sets, the duo’s brilliant shotmaking kept the Centre Court crowd–and the world–spellbound.

But the match’s significance extended well beyond the immaculate grass courts of Wimbledon. Against the backdrop of the Great Depression and the brink of World War II, one man played for the pride of his country while the other played for his life. Budge, the humble hard-working American who would soon become the first man to win all four Grand Slam titles in the same year, vied to keep the Davis Cup out of the hands of the Nazi regime. On the other side of the net, the immensely popular and elegant von Cramm fought Budge point for point knowing that a loss might precipitate his descent into the living hell being constructed behind barbed wire back home.

Born into an aristocratic family, von Cramm was admired for his devastating good looks as well as his unparalleled sportsmanship. But he harbored a dark secret, one that put him under increasing Gestapo surveillance. And his situation was made even more perilous by his refusal to join the Nazi Party or defend Hitler. Desperately relying on his athletic achievements and the global spotlight to keep him out of the Gestapo’s clutches, his strategy was to keep traveling and keep winning. A Davis Cup victory would make him the toast of Germany. A loss might be catastrophic.

Watching the mesmerizingly intense match from the stands was von Cramm’s mentor and all-time tennis superstar Bill Tilden–a consummate showman whose double life would run in ironic counterpoint to that of his German pupil.

Set at a time when sports and politics were inextricably linked, A Terrible Splendor gives readers a courtside seat on that fateful day, moving gracefully between the tennis match for the ages and the dramatic events leading Germany, Britain, and America into global war. A book like no other in its weaving of social significance and athletic spectacle, this soul-stirring account is ultimately a tribute to the strength of the human spirit.

Praise For A Terrible Splendor: Three Extraordinary Men, a World Poised for War, and the Greatest Tennis Match Ever Played…

“Rich and rewarding…makes a strong claim to greatest-ever status for Budge vs. Cramm in the Davis Cup…Fisher brings a sharp eye for details. He vividly sketches the anything-goes atmosphere of Weimar Berlin [and] turns up details that tennis fans will savor.”
—Wall Street Journal

“Tennis has seen plenty of great matches…but none with the extra-athletic significance of the Budge-Cramm affair…as the match enters its final set, all the narrative pieces lock together and A Terrible Splendor becomes as engrossing as the contest it portrays...Cramm’s life is a movie development deal waiting to happen.”
—Washington Post

“Richly detailed…the story moves from one nail-biting set to the next against a backdrop of improbably high personal and political stakes.”
—Boston Globe

“Vivid…The compelling nature of the match, in tennis terms alone, would be enough to make this a gripping read…But tennis is almost the least interesting element of Fisher’s account. For the historic match between the two players took place in London, with the world poised for brutal war and the players bringing all manger of psychological baggage on court with them….[Fisher] shows how sport can stand both outside the ‘real world,’ and yet remain subject to its dark whims.”
—Financial Times

“Exciting…a thoroughly riveting account of an intense human endeavor…the astonishing, inspiring story of a sports hero who was not merely a heroic tennis player, but a genuinely heroic man.”
—The Commercial Dispatch

"Marshall Jon Fisher has masterfully woven the story of Europe on the edge of war, a man pursued by the Gestapo, and America on the rise into the tale of the greatest tennis match of the century. A Terrible Splendor is tense, tragic, beautifully told, and immensely enjoyable."
—Atul Gawande, National Book Award Finalist and New York Times bestseller author of Complications and Better

"Forget Federer versus Nadal, and Borg versus McEnroe. Marshall Jon Fisher convincingly demonstrates that the greatest tennis match of all time was Gottried Von Cramm versus Don Budge in the 1937 Davis Cup semifinals. This is one of the best sports books you will ever read. But it's more than a sports book: as absorbing as the drama unfolding on Wimbledon's Centre Court is, it's surpassed by the drama of history swirling outside it. Fisher masterfully weaves biography, history, and sports--and sex and romance and the drums of war--into a thoroughly riveting narrative. Full of ironic twists and astonishing revelations, A Terrible Splendor is a literary triumph."
—Scott Stossel, Deputy Editor, Atlantic Monthly

“Marshall Jon Fisher has turned a tennis court masterpiece -- American Don Budge versus German Gottfried von Cramm to decide the 1937 Davis Cup -- into a literary masterpiece.   Blending their lives with the darkening times, Fisher illuminates bygone cultures in the fascinating tale of a July afternoon in London.”
—Bud Collins, writer for the Boston Globe and commentator for ESPN and Tennis Channel

“There could be no more disparate characters in any sport than Bib Bill Tilden, Don Budge and Baron Gottfried von Cramm. Marshall Jon Fisher has done a marvelous job of weaving the threads of these three lives together at a time when the world was coming apart and at the moment when Budge and von Cramm were playing in the most important — if not the best — tennis match ever. This is sports history at its finest and most thorough.”
—Frank Deford, Senior Contributing Writer, Sports Illustrated, and Commentator on NPR’s “Morning Edition”

“Through the prism of one of the greatest tennis matches ever played, Marshall Jon Fisher throws open a window on the terrifying world of the thirties in Europe; illuminating in vivid detail the persecution of Baron Gottfried von Cramm; the pitiful kow-towing to Hitler by the tennis authorities and, rising above it all, the innate sportsmanship of the two friends and rivals, von Cramm and Donald Budge. Between every Budge backhand and von Cramm volley, history rears up in all its ‘terrible splendor.’”
—Richard Evans, Correspondent, The (London) Observor

“For those of us who believe that tennis is a metaphor for life, here at last in this marvelous narrative is proof, served up on the rackets of Budge and Von Cramm.  A Terrible Splendor is a wonderful account of a time of great historical drama, with the world on the brink of war, and everything resting, or so it would seem, on getting the ball back over the net just one more time.”
—Abraham Verghese, author of The Tennis Partner and Cutting for Stone

"I’m grateful for my ignorance of tennis history, since if I’d known the outcome of the 1937 Davis Cup match before I read this engrossing book, I might not have sat on the edge of my seat and bitten my nails as Don Budge and Gottfried von Cramm served and volleyed. Marshall Jon Fisher captures two memorable characters, illuminates their historical and cultural milieus, and keeps us in delicious suspense."
—Anne Fadiman, author of the National Book Critics Circle Award-winning The Spirit Catches You and You Fall Down and the New York Times bestseller Ex Libris

MARSHALL JON FISHER’s work has appeared in The Atlantic, Harper’s, and other magazines. His essay "Memoria ex Machina" was featured in Best American Essays 2003. He has written several books with his father, David E. Fisher, including Tube: The Invention of Television. Marshall lives in the Berkshires with his wife
Loading...
or
Not Currently Available for Direct Purchase