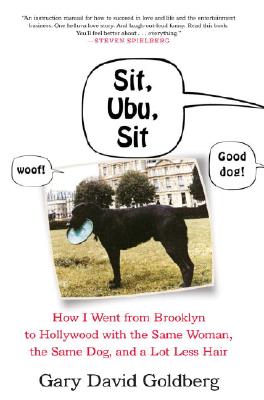 How I went from Brooklyn to Hollywood with the same woman, the same dog, and a lot less hair

A sports-crazed kid from Bensonhurst, Brooklyn, Gary David Goldberg never imagined he’d end up in Hollywood, let alone make it big there. But as a twenty-five-year-old waiter in Greenwich Village he met Diana, the love of his life; followed her out to Northern California; then moved in and never moved out. He also, without realizing it, put himself on track to found UBU Productions (named after his beloved Labrador retriever) and become a successful creator of such family sitcoms as Family Ties, Brooklyn Bridge, and Spin City.*

In Sit, Ubu, Sit, award-winning writer/producer Goldberg tells the mostly upbeat, sometimes difficult, and frequently hilarious tale of his improbable career and the people who have filled it.

A love story and a rare behind-the-scenes look at the entertainment industry, Sit, Ubu, Sit proves that it is possible to be creative and successful while holding on to your integrity, your family, and your sense of humor.


Praise For Sit, Ubu, Sit: How I went from Brooklyn to Hollywood with the same woman, the same dog, and a lot less hair…

“Very funny. Very touching . . . and not a lot of big words. Gary is many things: a great boss, a smart writer, a very good basketball player . . . and now an even better author.”
—George Clooney

“Sit, Ubu, Sit is a poignant, hilarious, humble book—but at its heart a true love story. I couldn’t put it down.”—Julia Louis-Dreyfus

“Gary David Goldberg has a heart the size of Brooklyn, and you’ll feel it beating on each and every page of this sweet, beautifully written love story.”
—Claire Cook, author of Must Love Dogs and Life’s a Beach

“Full of love and laughter . . . Reading Sit, Ubu, Sit is like the best walk in the park on the most beautiful day of the year with your best dog, friend, or lover. You never want the experience to end.”
—Pat Mitchell, President and CEO, The Paley Center for Media