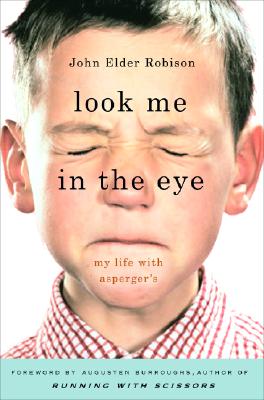 
Praise For Look Me in the Eye: My Life with Asperger's…

"Deeply felt and often darkly funny, Look Me in the Eye is a delight."
—People magazine, Critics Choice, 4 Stars

“Look Me in the Eye is a fantastic read that takes readers into the mind of an Aspergian both through its plot and through the calm, logical style in which Robison writes. . . Even if you have no personal connections with Asperger’s, you’ll find that Robison—like his brother, Burroughs—has a life worth reading about.”
—Daily Camera

“There's an endearing quality to Robison and his story that transcends the "Scissors" connection … Look Me in the Eye is often drolly funny and seldom angry or self-pitying. Even when describing his fear that he'd grow up to be a sociopathic killer, Robison brings a light touch to what could be construed as dark subject matter…Robison is also a natural storyteller and engaging conversationalist.”
—The Boston Globe

“This is no misery memoir…[Robison] is a gifted storyteller with a deadpan sense of humour and the book is a rollicking read.
—Times (London)

“Affecting, on occasion surprisingly comic memoir about growing up with Asperger’s syndrome….The view from inside this little-understood disorder offers both cold comfort and real hope, which makes it an exceptionally useful contribution to the literature.
—Kirkus Reviews

John Elder Robison grew up in the 1960s, before the diagnosis of Asperger's syndrome existed. Today he has claimed his spot on the autism spectrum; he blogs for "Psychology Today" and is an adjunct professor at Elms College in Chicopee, Massachusetts. John serves on the Science Board of Autism Speaks and on the Public Review Board for the National Institutes of Health, where he considers research to improve the lives of autistic people and their families. He is also currently involved in autism research and programs at Beth Israel Deaconess Medical Center and Mass General Hospital, two teaching hospitals of the Harvard Medical School.

When he's not writing, speaking, or involved in studies, John can be found at Robison Service, the automobile company he founded twenty-five years ago. Robison Service has established a reputation as a leading independent restorer and customizer of BMW, Mercedes, Land Rover, Porsche, Rolls-Royce, and Bentley automobiles. Visit John's company at www.robisonservice.com.

John lives in western Massachusetts among family, friends, animals, and machines.
Loading...
or
Not Currently Available for Direct Purchase