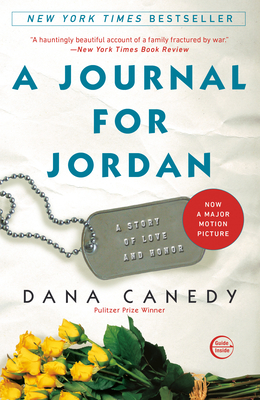 A Journal for Jordan

A Story of Love and Honor

“Full of wonderful treasures offered by a unique and spirited father . . . written with serene grace: part memoir, part love story, all heart.”—James McBride, author of The Color of Water

In 2005, Dana Canedy’s fiancé, First Sergeant Charles Monroe King, began to write what would become a two-hundred-page journal for his son in case he did not make it home from the war in Iraq. He was killed by a roadside bomb on October 14, 2006. His son, Jordan, was seven months old.

Inspired by his example, Dana was determined to preserve his memory for their son. A Journal for Jordan is a mother’s fiercely honest letter to her child about the parent he lost before he could even speak. It is also a father’s advice and prayers for the son he will never know.

A father figure to the soldiers under his command, Charles moved naturally into writing to his son. In neat block letters, he counseled him on everything from how to withstand disappointment and deal with adversaries to how to behave on a date. And he also wrote, from his tent, of recovering a young soldier’s body, piece by piece, from a tank—and the importance of honoring that young man’s life. He finished the journal two months before his death while home on a two-week leave, so intoxicated with love for his infant son that he barely slept.

This is also the story of Dana and Charles together—two seemingly mismatched souls who loved each other deeply and lost each other too soon. A Journal for Jordan is a tender introduction, a loving good-bye, a reporter’s inquiry into her soldier’s life, and a heartrending reminder of the human cost of war.

Praise For A Journal for Jordan: A Story of Love and Honor…

“This book is a gift, and not only to Jordan.”—USA Today

“Heartfelt . . . Canedy used her skills as a reporter to dig beneath the official story of King’s death. . . . These investigative passages are gripping. . . . King died a hero’s death, but Canedy’s embrace of life is a kind of heroism, too.”—Cleveland Plain Dealer

“Gut-wrenching . . . Canedy writes with the objective eye of a hard-line reporter yet manages to convey the complexities of the love between her and her fiance as well as the deep loss she feels in his absence. It's impossible to imagine what her pain is like, but she does a beautiful job of allowing us to come close.”—Washington Post

“Canedy's memoir speaks to military families everywhere. . . . By openly and honestly revealing her side of their highly emotional story as well, by detailing the effects of his death on her and subsequent interactions with government brass about burial and benefits, for example . . . she gives the project a greater significance, making it especially relevant for and meaningful to countless others in similar situations.”—San Francisco Chronicle

“Powerful . . . Not all great love stories are ignited by the lightning bolt of love at first glance; this humbler I’m-going-to-talk-myself-into-this-good-man version is believable and real. . . . A Journal for Jordan is impossible to read without a sense of bitter knowledge that this principled man fell at the behest of leaders less guided by honor. That is no trick O. Henry ending. It is a denouement full of suffering, worthy of Chekhov.”—Melissa Fay Greene, The New York Times

“Canedy’s talent at evoking character makes the account of King’s life and death not simply a story about the injustice of war, but a project in resurrection. Canedy allows King to come alive for her son and, to our benefit, for us. . . . Gripping . . . important.”—The New York Times Book Review

“It’s impossible not to be affected by her story.”—Entertainment Weekly

“At once inspiring and ineffably sad . . . Canedy captures the unique magnificence of the man she loved in a way that brings the beginnings of an understanding to the losses that other families bear.”—Denver Post

“This tragic story of love and war reminds all Americans that we are fortunate to have people like Sgt. Charles King, willing to die for our country. Dana Canedy bears witness to the enduring power of love, to Sgt. King's heroism and his unfailing devotion to his family and his men.”—Caroline Kennedy

“This book is a living, breathing legacy. It's full of wonderful treasures offered by a unique and spirited father, whose loving words of wisdom to his infant son are a rite of passage that will transform us all. It is written with serene grace: part memoir, part love story, all heart.”—James McBride, author of The Color of Water

“Dana Canedy's moving memoir has captured my heart and won't let it go. Courageous in its honesty and at times unsettling, it draws us deep into the soul of a woman in love, the pain of her loss and the unpardonable theft of hopes and dreams, lives and futures stolen by war. With an exquisite voice, Canedy recounts moments of intense emotion that haunt us long after savoring the last lines. I didn’t want it to end.”—Susan L. Taylor, Editor-in-Chief Emeritus, Essence, and founder of the National CARES Mentoring Movement

Dana Canedy is the executive vice president and publisher of Simon and Schuster. Previously, she was  the administrator of the Pulitzer Prizes and a senior editor at the New York Times, where she was a journalist for twenty years. In 2001, she was part of a team that won a Pulitzer Prize for national reporting for “How Race Is Lived in America,” a series on race relations in the United States. Raised near Fort Knox, she lives in New York City with her son, Jordan.

When Dana describes her ideal man, she envisions someone like her New York self. Should an ideal mate be like you or unlike you? How does her ideal evolve?

How are Dana and Charles different and how are they similar? Are they as different as Dana thinks?

How does Dana’s ambivalence toward her father affect her relationship with men? How does her view of her father change after Jordan is born? If you have children, did parenthood make you more or less accepting of your parents?

How do Charles’ and Dana’s experiences as African Americans shape their choices?

Both Dana and Charles struggle to balance challenging careers and their personal lives. How have you dealt with those demands in your life? What factors led Dana to shift her priorities and decide to have a child just as Charles was about to be deployed to Iraq?

The book captures both the fast-paced world of journalism and the rigors of military life. What did you find interesting or surprising about their vocations?

How did the chapters on Iraq affect you? Did it deepen your understanding of what is asked of soldiers and the nature of this war?

When Charles tells Dana that he will miss Jordan’s birth because his soldiers need him, do you understand his decision?

Discuss the role of religious faith for Charles. How does Dana interpret his angel portrait? What does the drawing mean to Charles?

When Dana investigates the fatal mission, she discovers that the military often sanitizes the circumstances of a soldier’s death. Should loved ones be protected from the truth in this way?

Dana learns things she didn’t know about Charles from his journal. Do we ever fully know the ones we love? Does this book inspire you to learn more about your loved ones?

Dana depicts a mature, romantic love. How do you feel about her decision to present their relationship, flaws and all, to their son? How is love defined? What does Dana mean when she says, “I realized that day our relationship would never be perfect. Only perfect for us”?

Why does Dana make each chapter a letter? How does she use Charles’ journal and to what effect? What makes this book a compelling read that transcends one family’s grief?

What is a father? Does anything in A Journal for Jordan lead you to rethink your definition?