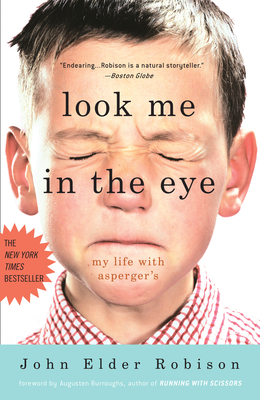 “As sweet and funny and sad and true and heartfelt a memoir as one could find.” —from the foreword by Augusten Burroughs

Ever since he was young, John Robison longed to connect with other people, but by the time he was a teenager, his odd habits—an inclination to blurt out non sequiturs, avoid eye contact, dismantle radios, and dig five-foot holes (and stick his younger brother, Augusten Burroughs, in them)—had earned him the label “social deviant.” It was not until he was forty that he was diagnosed with a form of autism called Asperger’s syndrome. That understanding transformed the way he saw himself—and the world. A born storyteller, Robison has written a moving, darkly funny memoir about a life that has taken him from developing exploding guitars for KISS to building a family of his own. It’s a strange, sly, indelible account—sometimes alien yet always deeply human.

Praise For Look Me in the Eye: My Life with Asperger's…

“An entertaining, provocative and highly-readable story by a great storyteller...you will rethink your own definition of normal, and it may spark a new appreciation of the untapped potential behind every quirky, awkward person who doesn’t quite fit in.”
—New York Times blog

“Deeply felt and often darkly funny, Look Me in the Eye is a delight.”
—People magazine (Critics Choice, 4 Stars)

“Look Me in the Eye is a fantastic read that takes readers into the mind of an Aspergian both through its plot and through the calm, logical style in which Robison writes. . . Even if you have no personal connections with Asperger’ s, you’ll find that Robison—like his brother, Burroughs—has a life worth reading about.”
—Daily Camera

“Dramatic and revealing...There's an endearing quality to Robison and his story that transcends the "Scissors" connection … Look Me in the Eye is often drolly funny and seldom angry or self-pitying. Even when describing his fear that he'd grow up to be a sociopathic killer, Robison brings a light touch to what could be construed as dark subject matter…Robison is also a natural storyteller and engaging conversationalist.”
—The Boston Globe

“This is no misery memoir…[Robison] is a gifted storyteller with a deadpan sense of humour and the book is a rollicking read.”
—Times (UK)

“Look Me in the Eye should be required reading for teachers and human services professionals, concerned parents and anyone who likes a well-crafted story of a life zestfully lived to the beat of wildly different drums.”
—Bookreporter

“Affecting, on occasion surprisingly comic memoir about growing up with Asperger’s syndrome….The view from inside this little-understood disorder offers both cold comfort and real hope, which makes it an exceptionally useful contribution to the literature.”
—Kirkus Reviews

JOHN ELDER ROBISON is the New York Times bestselling author of Look Me in the Eye, Be Different and Raising Cubby. He lectures widely on autism and neurological differences, and is a member of the Interagency Autism Coordinating Committee of the US Dept. of Health and Human Services. John also serves on committees and review boards for the CDC and the National Institutes of Health. A machinery enthusiast and avid photographer, John lives in Amherst, Massachusetts with his family, animals, and machines.