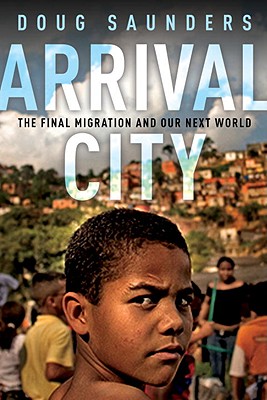 The Final Migration and Our Next World

From one of Canada's leading journalists comes a major book about how the movement of populations from rural to urban areas on the margins is reshaping our world. These transitional spaces are where the next great economic and cultural boom will be born, or where the great explosion of violence will occur. The difference depends on our ability to notice.

The twenty-first century is going to be remembered for the great, and final, shift of human populations out of rural, agricultural life into cities. The movement engages an unprecedented number of people, perhaps a third of the world's population, and will affect almost everyone in tangible ways. The last human movement of this size and scope, and the changes it will bring to family life, from large agrarian families to small urban ones, will put an end to the major theme of human history: continuous population growth.

Arrival City offers a detailed tour of the key places of the "final migration" and explores the possibilities and pitfalls inherent in the developing new world order. From villages in China, India, Bangladesh and Poland to the international cities of the world, Doug Saunders portrays a diverse group of people as they struggle to make the transition, and in telling the story of their journeys — and the history of their often multi-generational families enmeshed in the struggle of transition — gives an often surprising sense of what factors aid in the creation of a stable, productive community.

Praise For Arrival City: The Final Migration and Our Next World…

"A broadly researched, passionate and portentous call for a new way to look at the experience of migrants. It is essential reading… for all who look at the future of cities with a mix of hope and fear."
—Winnipeg Free Press

"A masterpiece of reporting, one of the most valuable and lucid works on public policy published anywhere in years."
—Edmonton Journal

"A timely contribution to the discourse on global cities… Saunders offers a readable, immediate social history."
—Mark Kingwell, The Globe and Mail

"Doug Saunders is neither a glum pessimist nor a glib optimist and Arrival City will not please closed minds. But this provocative, disturbing, and exhilarating book is a delight for thoughtful readers. Indeed, it is essential. Migration is reshaping the world and, as Saunders demonstrates, the choices we make today will determine whether it brings prosperity or catastrophe tomorrow."
—Dan Gardner, author of Risk: The Science and Politics of Fear

"Arrival City is scarier than a dark urban fantasy and more gritty than the bottom of a demographer's coffee cup. It's also highly topical, as population growth and immigration are subjects of heated debate worldwide."
—Daily Mercury

"Saunders's approach is through anecdotes and vignettes, but… they cumulate into a persuasive whole… Saunders's practical suggestions for helping immigrants… are sure to attract attention… [A] highly readable book."
—Paul Collier, Financial Times

"An important new book… Saunders's greatest strength lies in the global breadth of his reportage… His evocative descriptions… transform a complex, serious subject into a page-turning read."
—Literary Review

"Few books can make rationalists feel optimistic and empowered for the future. This one does."
—The Guardian

DOUG SAUNDERS is the European Bureau Chief of the "Globe and Mail" and the author of a popular and award-winning column devoted to intellectual ideas and social developments behind the news. He has won four National Newspaper Awards. He is based in London, England.
Loading...
or
Not Currently Available for Direct Purchase