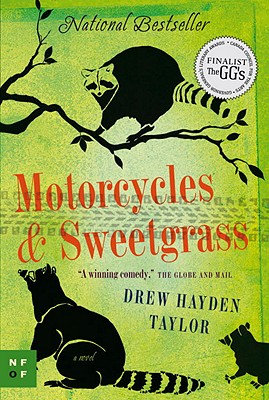 A story of magic, family, a mysterious stranger . . . and a band of marauding raccoons.

Otter Lake is a sleepy Anishnawbe community where little happens. Until the day a handsome stranger pulls up astride a 1953 Indian Chief motorcycle – and turns Otter Lake completely upside down. Maggie, the Reserve’s chief, is swept off her feet, but Virgil, her teenage son, is less than enchanted. Suspicious of the stranger’s intentions, he teams up with his uncle Wayne – a master of aboriginal martial arts – to drive the stranger from the Reserve. And it turns out that the raccoons are willing to lend a hand.


“A near-perfect debut, a masterful mythic-comedy balancing contemporary issues and realities with magic and history. . . . Motorcycles & Sweetgrass is a trickster story, but it’s also a fundamentally human account of individuals and of a people struggling to find a place for themselves in the world. . . . A broad, bawdy, raucous, deeply felt and utterly involving narrative, a genuine pleasure to read. . . . Motorcycles & Sweetgrass positively crackles with life, love and magic. What more can you ask of a book?”
— Robert J. Wiersema, Edmonton Journal

“A winning comedy.”
— The Globe and Mail

“Motorcycles & Sweetgrass may be concerned with aboriginal community politics, identity, mythology and intergenerational legacies, but it reads like a romp. . . . Yet the book’s real strength is its underlying account of a community struggling to weave an increasingly abstract traditional past with some kind of meaningful future.”
— Toronto Star

“Drew Hayden Taylor’s got no qualms about poking fun at his Native roots, and that’s what makes Motorcycles & Sweetgrass such a pleasure. It’s playful yet soulful, with a narrative that keeps those pages turning. . . . A fun, rollicking book, and Taylor’s voice is fresh and unique.”
— NOW (Toronto)

“Taylor brings a modern twist to ancient native folklore. Motorcycles & Sweetgrass is a charming story about the importance of balance and belief—and a little bit of magic—in everyone’s life.”
— Quill & Quire

“If the great Ojibway trickster Nanabush wrote fiction, I imagine he’d write just like Drew Hayden Taylor. You will find much sadness just below the laughs, and sly humour masked by sorrow. A wisdom exists in these pages that only comes from someone who writes from his heart.”
— Joseph Boyden

“Fast-paced, uproariously funny and genuinely thrilling. Drew Hayden Taylor is one of Canada’s finest and funniest writers.”
— Ian Ferguson, author of Village of the Small Houses

“Funny, heartfelt, hopeful and illuminating. Motorcycles & Sweetgrass made me laugh and made me think, sometimes in the same sentence. Drew Hayden Taylor is a master storyteller.”
— Terry Fallis, author of The Best Laid Plans

“Drew Hayden Taylor has woven an epic tale of magic, mystery and charm for the world to discover in Motorcycles & Sweetgrass. This is a novel to savor. A complete delight!”
— Richard Van Camp, author of The Moon of Letting Go and The Lesser Blessed

An Ojibway from the Curve Lake First Nations, Drew Hayden Taylor has worn many hats in his literary career, from performing stand-up comedy at the Kennedy Center in Washington, D.C., to lecturing at the British Museum on the films of Sherman Alexie. Over the last two decades, he has been an award-winning playwright (with over seventy productions of his work), a journalist/columnist (with a column in several newspapers across the country), short-story writer, novelist and scriptwriter (The Beachcombers, North of Sixty, etc.), and has worked on seventeen documentaries exploring the Native experience. In 2007, Annick Press published his first children's novel, The Night Wanderer: A Native Gothic Novel, a teen story about an Ojibway vampire. Last year, his non-fiction book exploring the world of Native sexuality, called Me Sexy, was published by Douglas & McIntyre. It is a follow-up to his highly successful book on Native humour, Me Funny.
Loading...
or
Not Currently Available for Direct Purchase