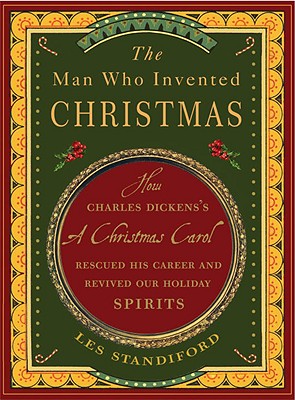 The Man Who Invented Christmas

“Les Standiford gives us the chance to understand Dickens not only as an author, but as a person struggling to save his career, who, in the process, reinvigorates the Christmas spirit. Standiford excels at telling the story of historical figures in a way that reads like a novel, so we learn almost in spite of ourselves. This is an irresistible read for the holiday season!”
— Rona Brinlee, The Book Mark, Atlantic Beach, FL
View the List

As uplifting as the tale of Scrooge itself, this is the story of how one writer and one book revived the signal holiday of the Western world.

Just before Christmas in 1843, a debt-ridden and dispirited Charles Dickens wrote a small book he hoped would keep his creditors at bay. His publisher turned it down, so Dickens used what little money he had to put out A Christmas Carol himself. He worried it might be the end of his career as a novelist.

The book immediately caused a sensation. And it breathed new life into a holiday that had fallen into disfavor, undermined by lingering Puritanism and the cold modernity of the Industrial Revolution. It was a harsh and dreary age, in desperate need of spiritual renewal, ready to embrace a book that ended with blessings for one and all.

With warmth, wit, and an infusion of Christmas cheer, Les Standiford whisks us back to Victorian England, its most beloved storyteller, and the birth of the Christmas we know best. The Man Who Invented Christmas is a rich and satisfying read for Scrooges and sentimentalists alike.

Praise For The Man Who Invented Christmas: How Charles Dickens's A Christmas Carol Rescued His Career and Revived Our Holiday Spirits…

“In this small but remarkable book, Les Standiford offers readers a gift for all seasons. Carefully researched and written in a stately, lucid prose, this book will be cherished by those who love Dickens, enjoy Christmas, or ponder the endless mysteries of human behavior.”
—Roland Merullo, author of American Savior

“A wonderfully absorbing and revealing account, full of things I did not realize about A Christmas Carol, Charles Dickens, and the world of publishing. Once I started reading this book, truly, I could not put it down.”
—Dan Wakefield, author of New York in the Fifties

“The Man Who Invented Christmas is destined to be a classic about a classic. As Tiny Tim might say, ‘God Bless Everyone,’ in this case Standiford, for creating such a delightful and engaging gem—part history, part literary analysis, and all heart, just like the book that inspired it.”
—Madeleine Blais, winner of the Pulitzer Prize and author of Uphill Walkers

LES STANDIFORD is the author of the critically acclaimed "Last Train to Paradise, Meet You in Hell, " and "Washington Burning," as well as ten novels. Recipient of the Frank O'Connor Award for Short Fiction, he is director of the Creative Writing Program at Florida International University in Miami, where he lives with his wife and three children.
Loading...
or
Not Currently Available for Direct Purchase