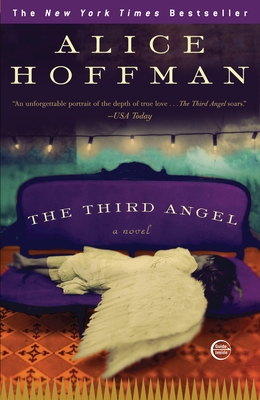 A magical and stunningly original story that charts the lives of three women in love with the wrong men from the bestselling author of Reese Witherspoon Book Club pick, The Rules of Magic

“Headstrong women, reckless love affairs and a liberal dusting of the supernatural are the pleasurable trademarks of an Alice Hoffman novel. . . . [The Third Angel] should bewitch old fans and new readers alike.”—People

Headstrong Madeleine Heller finds herself hopelessly attracted to her sister’s fiancé. Frieda Lewis, a doctor’s daughter and a runaway, becomes the muse of an ill-fated rock star. And beautiful Bryn Evans is set to marry an Englishman while secretly obsessed with her ex-husband. At the heart of the novel is Lucy Green, who blames herself for a tragic accident she witnessed at the age of twelve, and who spends four decades searching for the Third Angel–the angel on earth who will renew her faith.

Brilliantly evoking London’s King’s Road, Knightsbridge, and Kensington while moving effortlessly back in time, The Third Angel is a work of startling beauty about the unique, alchemical nature of love.

Praise For The Third Angel: A Novel…

“Is there an American novelist who understands the complicated and mulitfacted nature of love in all its manifestations — romantic, familial, platonic — better than Alice Hoffman?... Some critics have minimed the complexity of Hoffman’s work by refering to her as a romance writers. Well, Hoffman is a romance writer, but then so were Flaubert, Proust, the Bronte sisters, and Jane Austen. The Third Angel is indeed a romance, but one of intricacy and pathos, with characters beautifully, believably and empathetically drawn.…The Third Angel represents yet another strong, visceral and deeply, darkly moving tale of love and heatbreak, tragedy and redemption from a writer whose keen ear for the measure struck by the beat of the human heart is unparalleled. The Third Angel is an intense, provocative and throughly affecting novel.”
— The Chicago Tribune

“Like Michael Cunningham’s ‘The Hours,’ Hoffman’ s tale weaves the stories of women at key moments in their lives with revelations both stunning and inevitable.”
— The Pittsburgh Post Gazette

“Its realism, combined with a refreshing lightness and its success in portraying emotion with empathy, draws the reader into a deep involvement with the books’ appealing yet flawed characters. Each woman faces up to her challengers in her own way, proving that everyone in the end is responsible for his or her own destiny.”
— The Economist

“Hoffman’s luminous language bounces us into accepting not only coincident but also its consequences.”
— The Boston Globe

“Alice Hoffman paints her books in big strokes and bright colors, with slashes of romantic reds and blacks. She’s a teller of fairy tells, well-worn or new.”
— The Columbus Dispatch

“With a graceful nod to the power of redemption, Alice Hoffman reminds readers we are all hurt and broken, stumbling through life and fumbling for love, but sometimes we can still find out way to where we want to go.”
— Charlotte Observer

“Headstrong women, reckless love affairs and a liberal dusting of the supernatural are the pleasurable trademarks of an Alice Hoffman novel….Her passionate storytelling and
intense characters make a deeply personal connetion that should bewitch old fans and new readers alike.”
— People Magazine (A “People Pick,” 4-stars)

“Hoffman makes vivid and new the realization that grace, beauty, and forgiveness can arise out of the most devastating situations.”
— Elle

“Alice Hoffman’s richly layered novel, The Third Angel, is one of her best.”
—More

“Hands down, this captivating book is one of Hoffman’s best. It follows three women’s lives as they flow together and apart, tributaries linked by the same tragic love story and mysterious ghost. You’ll want to start it again as soon as you’re done.”
— Redbook

“A book that’s hard to put away completely. Even long after it’ s finished, you may find its characters sneaking, like ghosts, back into your head.”
— St. Louis Post Dispatch

“Elegant and stunning….Hoffman interweaves the three storioes, gazing unerringly into forces that cause some people to self-destrut and others to find inner strength to last a lifetime.”
— Publishers Weekly (starred review)

“One of her best…an exceptionally well-structured, beguiling, and affecting triptych of catastrophic love stories….Not only is Hoffman spellbinding in this incandescent fusion of dark romance and penetrating psychic insight, she also opens diverse and compelling worlds, dramatizes the shocks and revelations that forge the self, and reveals the necessity and toll of empathy and kindness. Hoffman has transcended her own genre.”
— Booklist (starred review)

“The Third Angel places Hoffman at perhaps the pinnacle of her bountiful literary talents.”
—Bookpage

“A mesmerizing tale of the human condition….sure to please Hoffman’s fans and win over new readers.”
—Library Journal

“The Third Angel is brilliantly crafted, deeply moving, and utterly enchanting. I loved these characters for their complexity, their unpredictability and for the way they showed subtle and shifting nuance in human nature. One of the best things about Alice Hoffman's writing is that she grounds you in detail and also frees your imagination to soar to places it has never been--often simultaneously.  Reading her is immensely satisfying--and addictive!”
— Elizabeth Berg, author of The Day I Ate Whatever I Wanted

“With her glorious prose and extraordinary eyes . . . Alice Hoffman seems to know what it means to be a human being.”
—Susan Isaacs, Newsday

“Hoffman’s characters, male and female, tend to be defined by the restless, lonely ache of what’s missing in their lives, which becomes clear only when they fill the void with something either unexpectedly right or horribly
wrong. Along the way, Hoffman seems to wriggle into their skin, breathe their air, and think their thoughts.”
—Entertainment Weekly

Alice Hoffman is the bestselling author of more than thirty acclaimed novels, including The Story Sisters, The Third Angel, The Ice Queen, Practical Magic, Here on Earth, The River King, and Skylight Confessions. She has also written two books of short stories, and eight books for children and young adults. Her work has been translated into more than twenty languages and published in more than one hundred foreign editions.
Loading...
or
Not Currently Available for Direct Purchase