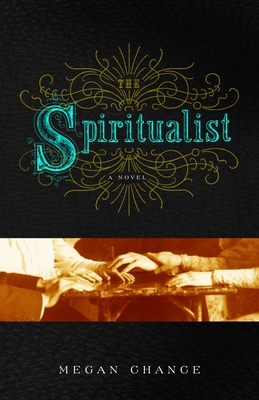 Sometimes truth is the greatest illusion of all.

On a cold January morning in 1856, Evelyn Atherton’s husband is found murdered after attending an exclusive séance. Having “married up” into New York society, Evie herself is the immediate suspect. Ostracized and vulnerable, she knows that to clear her name she must retrace her husband’s last steps. And so, joining forces with her husband’s best friend–and the only Manhattan lawyer who will accept her case–Evie dives into the mysterious underworld of the occult.

Before long, the trail brings them to a charismatic medium, Michel Jourdain. Evie’s instincts tell her the smooth-talking Jourdain is a charlatan–and her only hope for exoneration. But getting close to Jourdain means embracing a seductive and hypnotic world where clues to murder come through the voices of the dead.

Caught in a perilous game in which she is equal player and pawn, predator and victim, Evie finds there is no one to trust, perhaps not even herself. As her powerful in-laws build a case against her, and with time running out, Evie must face the real ghosts of her past if she is to have any hope of avoiding the hangman.

Praise For The Spiritualist: A Novel…

“The Spiritualist sweeps the reader into the richly detailed world of upstairs/downstairs New York City of the 1850s. The heroine's life and sanity are at stake in this unique murder mystery, and compelling characterization and clever plot twists abound. There's not a ghost of a chance that Megan Chance's enthralling story will let you put it down.”
—Karen Harper, New York Times bestselling author of The Last Boleyn

Megan Chance is the author of Prima Donna, The Spiritualist, An Inconvenient Wife, and Susannah Morrow, among others. A former television news photographer, she lives in the Pacific Northwest with her husband and two daughters.Visit her online at www.meganchance.com.
Loading...
or
Not Currently Available for Direct Purchase