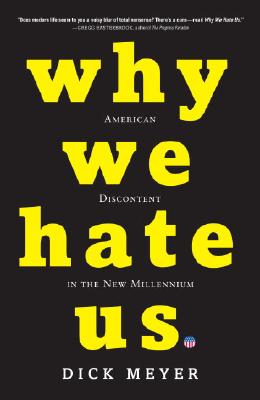 Why We Hate Us (Hardcover)

American Discontent in the New Millennium

Americans are as safe, well fed, securely sheltered, long-lived, free, and healthy as any human beings who have ever lived on the planet. But we are down on America. So why do we hate us? According to Dick Meyer, the following items on this (much abbreviated) list are some of the contributors to our deep disenchantment with our own culture:

Cell-phone talkers broadcasting the intimate details of their lives in public spaces
Worship of self-awareness, self-realization, and self-fulfillment
T-shirts that read, “Eat Me”
Facebook, MySpace, and kids being taught to market themselves
High-level cheating in business and sports
Reality television and the cosmetic surgery boom
Multinational corporations that claim, “We care about you.”
The decline of organic communities
A line of cosmetics called “S.L.U.T.”
The phony red state–blue state divide
The penetration of OmniMarketing into OmniMedia and the insinuation of both into every facet of our lives

You undoubtedly could add to the list with hardly a moment’s thought. In Why We Hate Us, Meyer absolutely nails America’s early-twenty-first-century mood disorder. He points out the most widespread carriers of the why-we-hate-us germs, including the belligerence of partisan politics that perverts our democracy, the decline of once common manners, the vulgarity of Hollywood entertainment, the superficiality and untrustworthiness of the news media, the cult of celebrity, and the disappearance of authentic neighborhoods and voluntary organizations (the kind that have actual meetings where one can hobnob instead of just clicking in an online contribution).

Meyer argues—with biting wit and observations that make you want to shout, “Yes! I hate that too!”—that when the social, spiritual, and political turmoil that followed the sixties collided with the technological and media revolution at the turn of the century, something inside us hit overload. American culture no longer reflects our own values. As a result, we are now morally and existentially tired, disoriented, anchorless, and defensive. We hate us and we wonder why.

Why We Hate Us reveals why we do and also offers a thoughtful and uplifting prescription for breaking out of our current morass and learning how to hate us less. It is a penetrating but always accessible Culture of Narcissism for a new generation, and it carries forward ideas that resounded with readers in bestsellers such as On Bullshit and Bowling Alone.

Praise For Why We Hate Us: American Discontent in the New Millennium…

In the 1976 movie "Network," Howard Beale, a veteran news anchor played by Peter Finch, becomes psychotic after being told he's too old to anchor the newscast. On what is supposed to be his final broadcast, he breaks out into a rant about the problems of the day, imploring viewers to "get up right now ... go to your windows, open them, and stick your head out, and yell, 'I'm as mad as hell and I'm not going to take this anymore.' "

Viewers nationwide respond by shouting out their windows en masse. The impromptu segment is a ratings hit, and the lunatic broadcaster is given time on future broadcasts for his tirades.

That satire reflected the insanity of popular culture, particularly television, that reflects a misplaced anger and confused values in society. Those are all themes that inspire Dick Meyer's incisive cultural critique of modern society in "Why We Hate Us."

The book's central argument is that Americans are dissatisfied with their own society. Meyer points, with a wealth of supporting evidence at his fingertips - the vulgarity of the marketing industry, the media's fascination with Paris Hilton, even people who talk loudly on their cell phones - to what he calls the "toxic" cultural environment, which is rife with disingenuousness. Our resulting self-hate is illustrated, he says, by polls showing declining faith in institutions.

"Americans don't trust our institutions or one another," he writes. "Without trust, without a shared vocabulary, without community, we feel endangered."

The author, a former CBS News producer and columnist for the network's Web site who now works for NPR, draws on sources as disparate as existentialism, books on American suburbanization and interviews with an evangelical pastor to generate a book that goes a long way in making sense out of the zeitgeist. The success of the book is less in its description of the cultural climate than in the way he draws together seemingly unconnected experiences to explain with Occam's-razor logic a complex society that is drawn to its culture and also repulsed by it…

After his critique of society, which synthesizes many recent academic and popular assessments of modern life, Meyer offers a solution to the problems of the world: a return to some traditions that predate the '60s. "[I]t is necessary to find and nurture authentic commitments in private and community life," he writes. "In making thoughtful choices, it is necessary to cultivate a guiding 'moral temperament' - a philosophic perspective."

His solution may sound like a old-timey bromide, but it's a refreshing alternative.
—San Francisco Chronicle

Hasn’t something like this happened to all of us? Don’t you hate it? Ever wondered why Americans feel like this kind of behavior is acceptable and justified?

In Why We Hate Us: American Discontent in the New Millennium, Dick Meyer shares countless examples that illustrate his thesis that Americans have grown to hate us–not America, and not each other, but the culture we have created and in which we actively participate. We have private conversations in public places, we are constantly attached to electronic devices and often choose them over in-person contact with the people that are right in front of us, and we are suffering from a “lack of social self-respect.” Meyer diagnoses America with a chronic case of low self-esteem and concludes that we are acting out. He couldn’t be more right.

Meyer’s central thesis is that we hate us because phoniness—-that bane of Holden Caulfield’s existence—-has become “the emblematic malady of our times,” along with a lack of manners and “the decline of organic community.” He explores the irony in the fact that Americans are inundated with phoniness and know how to recognize spin—-basically, we know when we’re being bullshitted—-but we have become so steeped in it that our lives have begun to reflect the very things we hate…

I loved this book for being so smart when it would have been very easy for Meyer to dumb things down. I’m so proud of him for resisting the temptation to go the route of trying to entertain the reader rather than asking difficult questions and forcing us to reflect on our own behavior and our role in perpetuating and now fighting against a culture that is sick and in need of help. I saw myself in many of the things he described, and I didn’t like it. I felt inspired to reexamine my ethics, my consumption of media and products, and my social conduct and relationships.

Though there are many chuckle-inducing statements in this book, Why We Hate Us is definitely not a light read, and that is a very good thing. This is a sociological analysis of modern culture, a rallying cry, and a call for social change. It is a rather balanced look at how things are and why they are that way, and Meyer is not afraid to lay blame where it is due. The bad news is that we are all guilty. The good news is that “it is not a sign of terminal social disease that we do hate us,” because we can all participate in rebuilding our culture and repairing our national self-esteem.

And we can start by not clipping our toenails in public.

"Dick Meyer has done the impossible -- he diagnoses the self-loathing, moral confusion and ennui that infect supersized America without hectoring us and badgering us, and without tiresome self-righteousness or smugness. Why We Hate Us takes us on a rollicking, laugh-out-loud ride across the brittle American landscape, and by 'us' I mean all of us -- liberal and conservative, black and white, city-dwellers, suburbanites and farmers. Dick Meyer understands that our national culture is on life-support, and he has thought long and hard about how to resuscitate it. Read this book, if not for you, than for your children, and for the America they will inherit."
—Jeffrey Goldberg, Atlantic Monthly national correspondent and author of Prisoners: A Story of Friendship and Terror

“A widely respected player in national politics, Dick Meyer has transcended the game most Americans hate to describe a larger context of relentless marketing, omnipresent pseudo-events and above all the enshrinement of phoniness that pollute the public square. Mixing original research, a keen, analytic mind and mordant, wicked wit, Why We Hate Us should be the bible for the vast majority of Americans who tell pollsters the country is on the wrong track but aren't clear why.”
—Thomas Oliphant, journalist and bestselling author of Praying for Gil Hodges: A Memoir of the 1955 World Series and One Family's Love of the Brooklyn Dodgers

“This is a serious, thought provoking discourse on America in the age of instant communication and a reminder that our new ability to know everything about everybody all the time may not be all good.”
—Bob Schieffer, Chief Washington Correspondent, CBS News

“Meyer has written a deeply informed critique of those ‘toxic and menacing’ aspects of American culture in which individuals, families, and communities have suffered as ‘self-awareness, self-realization and self-actualization became the measure of emotional and existential health.’ Meyer has put into words the tensions and anxieties that grip all Americans as they go about the difficult task of achieving happiness while struggling to ‘find a compass’ to give their lives moral legitimacy and purpose. If you are aiming for one guide to the well-lived life, buy this book.”
—Thomas B. Edsall, Joseph Pulitzer II and Edith Pulitzer Moore Professor at the Columbia Graduate School of Journalism, Political Editor of the Huffington Post, and author of Building Red America: The New Conservative Coalition and the Drive for Permanent Power