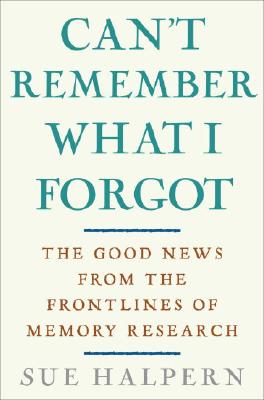 Can't Remember What I Forgot (Hardcover)

The Good News from the Front Lines of Memory Research

An essential behind-the-scenes foray into the world of cutting-edge memory research that unveils ﬁndings about memory loss only now available to general readers.


When Sue Halpern decided to emulate the ﬁrst modern scientist of memory, Hermann Ebbinghaus, who experimented on himself, she had no idea that after a day of radioactive testing, her brain would become so “hot” that leaving through the front door of the lab would trigger the alarm. This was not the ﬁrst time while researching Can’t Remember What I Forgot, part of which appeared in The New Yorker, that Halpern had her head examined, nor would it be the last.

Halpern spent years in the company of the neuroscientists, pharmacologists, psychologists, nutritionists, and inventors who are hunting for the genes and molecules, the drugs and foods, the machines, the prosthetics, the behaviors and therapies that will stave off Alzheimer’s and other forms of dementia and keep our minds–and memories–intact. Like many of us who have had a relative or friend succumb to memory loss, who are getting older, who are hearing statistics about our own chances of falling victim to dementia, who worry that each lapse of memory portends disease, Halpern wanted to ﬁnd out what the experts really knew, what the bench scientists were working on, how close science is to a cure, to treatment, to accurate early diagnosis, and, of course, whether the crossword puzzles, sudokus, and ballroom dancing we’ve been told to take up can really keep us lucid or if they’re just something to do before the inevitable overtakes us.

Beautifully written, sharply observed, and deeply informed, Can’t Remember What I Forgot is a book full of vital information–and a solid dose of hope.

SUE HALPERN received her doctorate from Oxford University in 1985 and ﬁrst began teaching at Columbia University's College of Physicians and Surgeons. She is the author of "Four Wings and a Prayer, Migrations to Solitude," and two books of ﬁction. Her work has appeared in "The New Yorker," the "New York Times, Rolling Stone, Conde Nast Traveler," and "The New York Review of Books," among other publications. She lives in Ripton, Vermont, with her husband, writer Bill McKibben, and their daughter, Sophie, and is a scholar-in-residence at Middlebury College.

Praise For Can't Remember What I Forgot: The Good News from the Front Lines of Memory Research…

“Fascinating….[Halpern’s] accomplishment is to have drawn out the myriad threads of these stories, connecting them when possible, to produce a panoramic portrait of an intricate and largely unknown world.”
—New York Review of Books

“Evincing a gift for perfect analogies and supple metaphors, mischievous humor, and righteous skepticism, Halpern is an exceptionally companionable and enlightening guide through the maze of memory maladies and the promising search for remedies.”
—Donna Seaman, Booklist (starred review)

“A vivid, often amusing introduction to a science that touches us all.”
—Publishers Weekly

“Engrossing….High-quality science writing: an illuminating picture of investigators at work and a lucid explication of their findings.”
—Kirkus

“Like her fellow New Yorker writer, Malcolm Gladwell, Sue Halpern has the remarkable capacity–genius, actually-- to absorb large amounts of complex information and deliver them to the reader in a comprehensible, engaging, page-turning way. In Can’t Remember What I Forgot, she travels to the cutting-edge of medical and scientific research about memory and reports back with critical information for all of us now dealing with aging parents and with our own aging. Informative, beautifully written, and hard to put down, this is a book you have to remember not to forget to buy.”
—Julia Alvarez