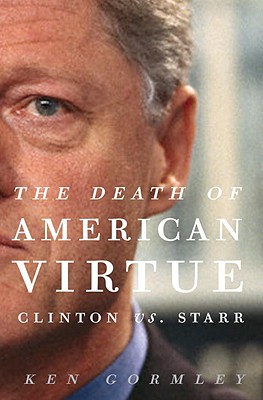 The Death of American Virtue

Ten years after one of the most polarizing political scandals in American history, author Ken Gormley offers an insightful, balanced, and revealing analysis of the events leading up to the impeachment trial of President William Jefferson Clinton. From Ken Starr’s initial Whitewater investigation through the Paula Jones sexual harassment suit to the Monica Lewinsky affair, The Death of American Virtue is a gripping chronicle of an ever-escalating political feeding frenzy.

In exclusive interviews, Bill Clinton, Ken Starr, Monica Lewinsky, Paula Jones, Susan McDougal, and many more key players offer candid reflections on that period. Drawing on never-before-released records and documents—including the Justice Department’s internal investigation into Starr, new details concerning the death of Vince Foster, and evidence from lawyers on both sides—Gormley sheds new light on a dark and divisive chapter, the aftereffects of which are still being felt in today’s political climate.

Ken Gormley is a law professor at Duquesne University, specializing in constitutional law, as well as a nationally renowned expert on Watergate and special prosecutors. He is the author of the critically acclaimed "Archibald Cox: Conscience of a Nation."