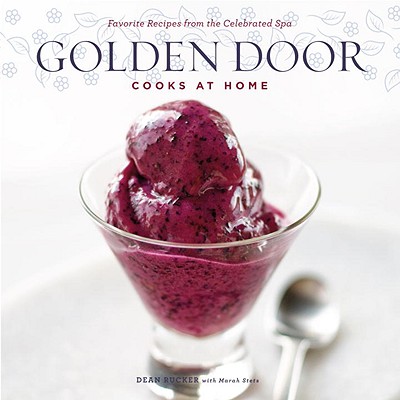 Favorite Recipes from the Celebrated Spa

Tucked away in the rolling hills and hidden valleys of idyllic southern California, the Golden Door is the epitome of the luxury spa experience. As the quintessential holistic retreat, the spa is equally renowned for its inspired, bold, and innovative cuisine. In celebration of fifty sensational years, the Golden Door shares the secrets of its celebrated kitchen, bringing its famously fresh and healthful cuisine into your home.

Also featured are cooking tips from Chef Rucker’s popular cooking classes, information about how to boost flavor healthfully, recipes for easy-to-make sauces and vinaigrettes, and sidebars on fitness, nutrition, and other aspects of the unique Golden Door experience. Whether you’ve been a guest in the past or have only dreamed of getting a taste of the Golden Door, you’ll enjoy this culinary tribute to one of the world’s most restorative and nurturing destinations.

DEAN RUCKER, a graduate of the California Culinary Academy, came to the Golden Door in 2000 as sous-chef. In June 2005, he was named executive chef, and his bold and fresh new American cuisine has been met with accolades ever since.

MARAH STETS is a food writer and editor. Her most recent collaboration was with Jim Denevan on "Outstanding in the Field."

GOLDEN DOOR has been the premier spa in the United States since it opened in 1959. With architectural elements modeled after seventeenth- and eighteenth-century Japanese inns, and with programs incorporating Zen philosophies of balancing physical and spiritual health, the spa revolutionized the American spa experience. In addition to the destination spa in Escondido, California, there are also full-service Golden Door resort spas throughout the United States and Puerto Rico.

Praise For Golden Door Cooks at Home: Favorite Recipes from the Celebrated Spa…

"Most of us won't be shelling out our dwindling greenbacks to spend a week at the Golden Door any time soon. Even when we were riding high, it was one of those deluxe destinations that always seemed a tad out of reach. But now the super-spa has decided to open its embossed golden doors to mere mortals and let us in on their renowned and revered culinary secrets. In Golden Door Cooks at Home, published to commemorate the spa's 50th birthday, Chef Dean Rucker shows us how to make his signature spa food, food that promises to leave you feeling 'sated, nurtured, and above all, healthy.' Using lean proteins, whole grains and fresh vegetables as his building blocks, real food, not stripped down 'replacement food,' Rucker turns out dish after dish with big, bold flavors. A spa secret he wholly recommends is 'the sensible use of the starter course'—try his Corn and Scallion Pancakes or Broccoli Basil Soup—so that you'll eat a smaller main course and be doubly happy. The vegetarian mains are marvelous, not to mention Walnut-Crusted Turkey Scaloppini, Teriyaki Black Cod and Moroccan Spice-Rubbed Lamb Loin. Take your taste buds on a virtual spa vacation."
—Bookpage

"Dean Rucker offers many of my favorite Golden Door dishes–from the modern Coriander-Crusted Tuna on Wonton Chips to the warming Corn and Scallion Pancakes–allowing all cooks to savor a light, healthy, wholesome, appealing cuisine."
—Patricia Wells, author of Vegetable Harvest