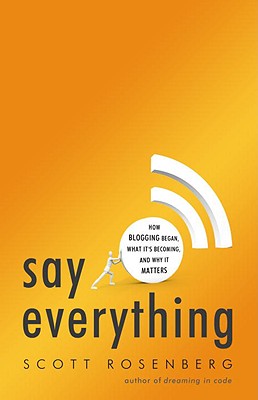 How Blogging Began, What It's Becoming, and Why It Matters

Blogs are everywhere. They have exposed truths and spread rumors. Made and lost fortunes. Brought couples together and torn them apart. Toppled cabinet members and sparked grassroots movements. Immediate, intimate, and influential, they have put the power of personal publishing into everyone’s hands. Regularly dismissed as trivial and ephemeral, they have proved that they are here to stay.

These blogging pioneers were the first to face new dilemmas that have become common in the era of Google and Facebook, and their stories offer vital insights and warnings as we navigate the future. How much of our lives should we reveal on the Web? Is anonymity a boon or a curse? Which voices can we trust? What does authenticity look like on a stage where millions are fighting for attention, yet most only write for a handful? And what happens to our culture now that everyone can say everything?

Before blogs, it was easy to believe that the Web would grow up to be a clickable TV–slick, passive, mass-market. Instead, blogging brought the Web’s native character into focus–convivial, expressive, democratic. Far from being pajama-clad loners, bloggers have become the curators of our collective experience, testing out their ideas in front of a crowd and linking people in ways that broadcasts can’t match. Blogs have created a new kind of public sphere–one in which we can think out loud together. And now that we have begun, Rosenberg writes, it is impossible to imagine us stopping.

In his first book, Dreaming in Code, Scott Rosenberg brilliantly explored the art of creating software ("the first true successor to The Soul of a New Machine," wrote James Fallows in The Atlantic). In Say Everything, Rosenberg brings the same perceptive eye to the blogosphere, capturing as no one else has the birth of a new medium.

Praise For Say Everything: How Blogging Began, What It's Becoming, and Why It Matters…

"This is a terrific history of blogging and a convincing case for its enduring significance. Rosenberg mixes the personal with the conceptual in the same wonderful way that the web does."
—Walter Isaacson, author of Einstein: His Life and Universe and CEO of the Aspen Institute

“Scott Rosenberg is the best defender blogging has ever had. He eludes hype. He comes with no motive to debunk. He knows the history cold, and tells his stories calmly. On what to credit blogging with, and how to delimit it, there is no one with finer judgment. And he is poetic on blogging as a democratic thing. Say Everything is where I'd tell you to start if you want to understand where blogging came from, and why it's important.
—Jay Rosen, creator of PressThink.org and professor of journalism at New York University

"Blogging gives everyone a printing press, unleashing a social force comparable to the printing press. Say Everything tells the story of the people, culture, and technology that made that happen and gives us an idea of where it's going, from a guy who saw it happen around him.”
—Craig Newmark, founder of Craigslist

"Eminently readable and historically definitive...Rosenberg has made it clear why the blogging revolution matters. Certain to be a classic."
—Howard Rheingold, author of Smart Mobs and Visiting Professor of Digital Journalism at Stanford

“The birth of newspapers, radio and television were fascinating events, filled with larger-than-life characters. The thing is, you didn't live through that, and the other thing is, there's not a lot you can do about it now. Blogging is now, it's real, it's fascinating and you're not just watching. Scott takes you on a guided tour of what got us to where we are today."
—Seth Godin, author of Tribes and Purple Cow

"Scott Rosenberg provides an excellent fifteen-year history of the voice of the person' on the Web, from Talking Points Memo to Twitter, and profiles both idealistic pioneers and scrappy entrepreneurs. He offers a cogent look at not only what's new, but also what's next."
—Greg Mitchell, Editor, Editor & Publisher

"The best history makes up for narrow focus with rich detail. Rosenberg’s book delivers exactly that plus his personal insider’s view of famous and familiar bloggerati–the technology, the fiefdoms, the whuffie, the money, and the love. I learned new things about people I’ve known and read for years."
—Lisa Stone, cofounder and CEO of BlogHer, Inc.

SCOTT ROSENBERG is an award-winning journalist who left the "San Francisco Examiner "in 1995 with a group of like-minded colleagues to found Salon.com, where he served first as technology editor, later as managing editor, and finally as vice president for new projects, leaving in 2007 to write "Say Everything." For much of that time he wrote a blog covering the world of computers and the web, explaining complex issues in a lively voice for a non-technical readership. His coverage of the Microsoft trial, the Napster controversy, and the Internet bubble earned him a regular following. Rosenberg's writing has appeared in the "New York""Times, Wired, "the "San Francisco Examiner," and other publications. His previous books include "Dreaming In Code." Visit his website at www.wordyard.com.