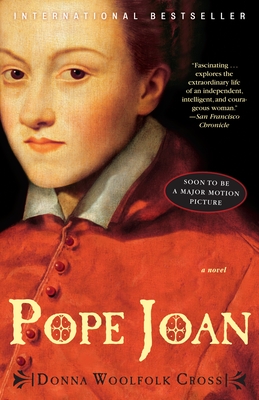 “Pope Joan has all the elements one wants in a historical drama—love, sex, violence, duplicity, and long-buried secrets. Cross has written an engaging book.”—Los Angeles Times Book Review

In this international bestseller and basis for the 2009 movie of the same name, Donna Woolfolk Cross brings the Dark Ages to life in all their brutal splendor and shares the dramatic story of a woman whose strength of vision led her to defy the social restrictions of her day.

For a thousand years her existence has been denied. She is the legend that will not die—Pope Joan, the ninth-century woman who disguised herself as a man and rose to become the only female ever to sit on the throne of St. Peter. Now in this riveting novel, Cross paints a sweeping portrait of an unforgettable heroine who struggles against restrictions her soul cannot accept.

Brilliant and talented, young Joan rebels against medieval social strictures forbidding women to learn. When her brother is brutally killed during a Viking attack, Joan takes up his cloak—and his identity—and enters the monastery of Fulda. As Brother John Anglicus, Joan distinguishes herself as a great scholar and healer. Eventually, she is drawn to Rome, where she becomes enmeshed in a dangerous web of love, passion, and politics. Triumphing over appalling odds, she finally attains the highest office in Christendom—wielding a power greater than any woman before or since. But such power always comes at a price . . .

“Brings the savage ninth century vividly to life in all its alien richness. An enthralling, scholarly historical novel.”—Rebecca Fraser, author of The Brontës


Praise For Pope Joan: A Novel…

“It is so gratifying to read about those rare heroes whose strength of vision enables them to ignore the almost overpowering messages of their own historical periods. . . . Pope Joan has all the elements one wants: love, sex, violence, duplicity and long-buried secrets. Cross has written an engaging book.” –Los Angeles Times Book Review

“A fascinating and moving account of a woman’s determination to learn, despite the opposition of family and society. Highly recommended.”–Library Journal (starred review)

“Cross makes an excellent, entertaining case that in the Dark Ages, a woman sat on the papal throne. . . . A colorful, richly imagined novel.” –Publishers Weekly

“Pope Joan reveals the harsh realities of the Dark Ages. Violence is rife in the government, church and home; logic and reason are shunned as “dangerous ideas” and women are considered useful only as men’s servants and child bearers. The novel explores the extraordinary life of an independent, intelligent and courageous woman who overcomes oppression and ascends to the highest level of religious power. . . . Cross’ masterful use of anticipation, as well as the sweeping historical landscape of the story, keep Pope Joan intriguing. . . . An exciting journey through history as it’s being made.”–San Francisco Chronicle

“Eloquently written and spellbinding in its account of this legendary figure.” –Arizona Republic

“The life of an intelligent, headstrong woman in 9th-century Europe, the kind of woman who might have dared such an adventure in an era when obedience was a woman’s most admired trait. . . . Cross succeeds admirably, grounding her fast-moving tale in a wealth of rich historical detail.” –Orlando Sentinel

“A story of passion and faith–and a reminder that some things never change, only the stage and players do.”–Fort Worth Star-Telegram

“A remarkable woman uses her considerable intellect–and more than a little luck–to rise from humble origins to become the only female Pope, in this breakneck adventure.” –Kirkus Reviews

In 1973, Cross moved to Syracuse, New York, with her husband and began teaching in the English department at an upstate New York college. She is the author of two books on language, Word Abuse and Mediaspeak, and coauthor of Speaking of Words. The product of seven years of research and writing, Pope Joan is her first novel. Cross is at work on a new novel set in 17th century France.

How important is it to this story to believe in its historicity? Are there lessons to be learned from Joan’s story whether it’s legend or fact? What are they?

Are reason and faith incompatible? What do you make of Aesculapius’ argument that lack of faith leads people to fear reason? What about Joan? Does her study of reason in the work of classical authors such as Lucretius diminish her faith?

Joan sacrificed much because she loved Gerold. Do you know women who have sacrificed opportunities to exercise mind, heart, and spirit for love of a man? For love of a child? Are such sacrifices justified?

What implications does Joan’s story have with regard to the role of women in the Catholic Church? Should nuns play a greater—or different—role? If so, what should that role be? Should women be priests? What effect would women priests have on the Church and its liturgy? What effect have they had on the Episcopal Church?

One reviewer wrote: “Pope Joan…is a reminder that some things never change, only the stage and the players do.” Are there any similarities between the way women live in some places of the world today and the way they lived back then?

What causes any society to oppress womankind? What are the root causes of misogyny? Are they based in religion or in society? Both? Neither?

Why might medieval society have believed so strongly that education hampered a woman’s ability to bear children? What purpose might such a belief serve?

What similarities or differences do you see between Pope Joan and Saint Joan of Arc? Why was one Joan expunged from history books and the other made a saint?

If Joan had agreed to leave with Gerold when he first came to Rome, what would her life have been like? Did she make the right choice or not?

What causes Joan’s inner conflict between faith and doubt? How do these conflicts affect the decisions she makes? Does she ever resolve these conflicts?