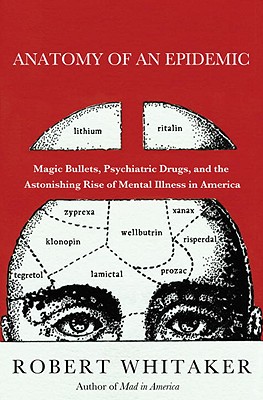 Anatomy of an Epidemic (Hardcover)

Magic Bullets, Psychiatric Drugs, and the Astonishing Rise of Mental Illness in America

In this astonishing and startling book, award-winning science and history writer Robert Whitaker investigates a medical mystery: Why has the number of disabled mentally ill in the United States tripled over the past two decades? Every day, 1,100 adults and children are added to the government disability rolls because they have become newly disabled by mental illness, with this epidemic spreading most rapidly among our nation’s children. What is going on?

Anatomy of an Epidemic challenges readers to think through that question themselves. First, Whitaker investigates what is known today about the biological causes of mental disorders. Do psychiatric medications fix “chemical imbalances” in the brain, or do they, in fact, create them? Researchers spent decades studying that question, and by the late 1980s, they had their answer. Readers will be startled—and dismayed—to discover what was reported in the scientific journals.

Then comes the scientific query at the heart of this book: During the past fifty years, when investigators looked at how psychiatric drugs affected long-term outcomes, what did they find? Did they discover that the drugs help people stay well? Function better? Enjoy good physical health? Or did they find that these medications, for some paradoxical reason, increase the likelihood that people will become chronically ill, less able to function well, more prone to physical illness?

This is the first book to look at the merits of psychiatric medications through the prism of long-term results. Are long-term recovery rates higher for medicated or unmedicated schizophrenia patients? Does taking an antidepressant decrease or increase the risk that a depressed person will become disabled by the disorder? Do bipolar patients fare better today than they did forty years ago, or much worse? When the National Institute of Mental Health (NIMH) studied the long-term outcomes of children with ADHD, did they determine that stimulants provide any benefit?

By the end of this review of the outcomes literature, readers are certain to have a haunting question of their own: Why have the results from these long-term studies—all of which point to the same startling conclusion—been kept from the public?

In this compelling history, Whitaker also tells the personal stories of children and adults swept up in this epidemic. Finally, he reports on innovative programs of psychiatric care in Europe and the United States that are producing good long-term outcomes. Our nation has been hit by an epidemic of disabling mental illness, and yet, as Anatomy of an Epidemic reveals, the medical blueprints for curbing that epidemic have already been drawn up.

ROBERT WHITAKER is the author of "Mad in America, The Mapmaker's Wife, "and "On the Laps of Gods, "all of which won recognition as "notable books" of the year. His newspaper and magazine articles on the mentally ill and the pharmaceutical industry have garnered several national awards, including a George Polk Award for medical writing and a National Association of Science Writers Award for best magazine article. A series he cowrote for the "Boston Globe "on the abuse of mental patients in research settings was named a finalist for the Pulitzer Prize in 1998.

Praise For Anatomy of an Epidemic: Magic Bullets, Psychiatric Drugs, and the Astonishing Rise of Mental Illness in America…

“The timing of Robert Whitaker’s “Anatomy of an Epidemic,” a comprehensive and highly readable history of psychiatry in the United States, couldn’t be better.”—Salon.com

“Anatomy of an Epidemic offers some answers, charting controversial ground with mystery-novel pacing.”—TIME.com

“Lucid, pointed and important, Anatomy of an Epidemic should be required reading for anyone considering extended use of psychiatric medicine. Whitaker is at the height of his powers.”—Greg Critser, author of Generation Rx

“Why are so many more people disabled by mental illness than ever before?  Why are those so diagnosed dying 10-25 years earlier than others?  In Anatomy of an Epidemic investigative reporter Robert Whitaker cuts through flawed science, greed and outright lies to reveal that the drugs hailed as the cure for mental disorders instead worsen them over the long term.  But Whitaker’s investigation also offers hope for the future: solid science backs nature’s way of healing our mental ills through time and human relationships.  Whitaker tenderly interviews children and adults who bear witness to the ravages of mental illness, and testify to their newly found “aliveness” when freed from the prison of mind-numbing drugs.”—Daniel Dorman, M.D., Clinical Assistant Professor of Psychiatry, UCLA School of Medicine and author of Dante’s Cure: A Journey Out of Madness

“This is the most alarming book I’ve read in years.  The approach is neither polemical nor ideologically slanted. Relying on medical evidence and historical documentation, Whitaker builds his case like a prosecuting attorney.”—Carl Elliott, M.D., Ph.D., Professor, Center for Bioethics, University of Minnesota and author of Better than Well: American Medicine Meets the American Dream

“Anatomy of an Epidemic investigates a profoundly troubling question: do psychiatric medications increase the likelihood that people taking them, far from being helped, are more likely to become chronically ill? In making a compelling case that our current psychotropic drugs are causing as much—if not more—harm than good, Robert Whitaker reviews the scientific literature thoroughly, demonstrating how much of the evidence is on his side. There is nothing unorthodox here—this case is solid and evidence-backed. If psychiatry wants to retain its credibility with the public, it will now have to engage with the scientific argument at the core of this cogently and elegantly written book.”—David Healy, M.D., Professor of Psychiatry, Cardiff University and author of The Antidepressant Era and Let Them Eat Prozac

“Anatomy of an Epidemic is a splendidly informed, wonderfully readable corrective to the conventional wisdom about the biological bases—and biological cures—for mental illness. This is itself a wise and necessary book—essential reading for all those who have experienced, or care for those who have experienced, mental illness—which means all of us! Robert Whitaker is a reliable, sensible, and persuasive, guide to the paradoxes and complexities of what we know about mental illness, and what we might be able to do to lessen the suffering it brings.”—Jay Neugeboren, author of Imagining Robert and Transforming Madness

“Every so often a book comes along that exposes a vast deceit. Robert Whitaker has written that sort of book. Drawing on a prodigious quantity of psychiatric literature as well as heart-rending stories of individual patients, he exposes a deeply disturbing fraud perpetrated by the drug industry and much of modern psychiatry—at horrendous human and financial cost to patients, their families, and society as a whole. Scrupulously reported and written in compelling but unemotional style, this book shreds the myth woven around today’s psychiatric drugs.” —Nils Bruzelius, former science editor for the Boston Globe and the Washington Post

“A devastating critique. . . . One day, we will look back at the way we think about and treat mental illness and wonder if we were all mad. Anatomy of an Epidemic should be required reading for both patients and physicians.” —Shannon Brownlee, senior research fellow, New America Foundation and author of Overtreated