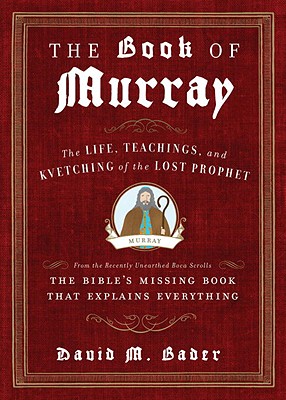 The Book of Murray

For years scholars have puzzled over the contrasts between modern Judaism and the world of the ancient Israelites. Leviticus explains keeping kosher, but where is the scriptural basis for pocketing a dinner roll from a buffet "for later"?

Finally, in The Book of Murray, we have answers. Here is the source for such timeless teachings as "Love the stranger, but not on the first date" and "Trust not a cardiologist who chain-smokes."

This remarkable biblical text, recently unearthed from a golf course in South Florida, is the surprising, hilarious, and uplifting chronicle of the Old Testament’s most unlikely prophet—Murray, son of Irving of the Tribe of Levi (Relaxed Fit).

Though a poor student and a disappointment to his parents, Murray hears God’s call. Soon he is wandering the land, spreading his unique brand of wisdom, whether from a mountaintop or at a themed bar mitzvah.

He reminds followers of the Ten (or so) Commandments. He boldly predicts the future of the Israelites: "Thy people will produce philosophers and scientists and novelists and Nobel Prize winners. Yet still thou wilt be unable to find the hood release on thy car." He judges a dispute between two women fighting over a cherished black-and-white cookie—all leading to the spectacular finale.

Filled with divinely inspired yet practical advice ("Thou shalt not freelance"), The Book of Murray is an affectionate and mirthful romp for readers of all faiths. Study its truths, learn the prophet’s stories, and, in the immortal words of Murray (handed down by his dyslexic scribe), "Go froth and multiply."


Praise For The Book of Murray: The Life, Teachings, and Kvetching of the Lost Prophet…

DAVID M. BADER is a writer in New York City, a pursuit that raises the eternal question, "From this he makes a living?" He is the author of "Haikus for Jews: For You, A Little Wisdom "and "Zen Judaism: For You, A Little Enlightenment." He began working on this book after an image of the Prophet Murray appeared to him on a toasted bagel.
Loading...
or
Not Currently Available for Direct Purchase