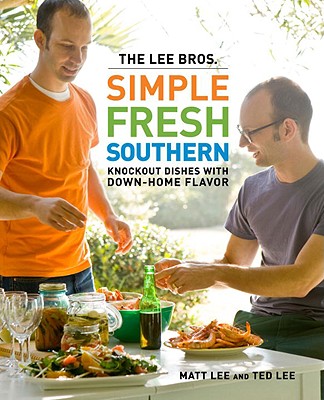 South Carolina-bred brothers, Matt and Ted Lee were raised on long-simmered greens, slow-smoked meats, and deep-fried everything. But after years of traveling as journalists and with farm fresh foods more available than ever, Matt and Ted have combined the old with the new, infusing family recipes with bright flavors. Using crisp produce, lighter cooking methods, and surprising combinations, these are recipes to make any night of the week.

The Lee Bros. are truly the best at interpreting the last remaining great regional American cuisine—that of our southern states—for the rest of us.  The magnificent collection of simple deliciousness makes me want to jump in the kitchen and get jiggy with a cold watermelon margarita.”
Mario Batali

“With Simple Fresh Southern, the Lee Bros. give us a southern cuisine fit for the twenty-first century. Matt and Ted offer the home cook recipes that are lighter, more flavorful, and simpler to execute, while still holding tight to their southern soul.”
Tom Colicchio

“These two boys are not only great cooks, I consider them the modern-day Lewis and Clark of southern cuisine.”
Paula Deen

“The charming Lee Bros. cook delicious, real food that’s alive with flavor. How wonderful to be invited into their Southern kitchen!”
Alice Waters

“The Lee Bros. Simple Fresh Southern has me eying stalwarts of the southern kitchen like field peas and sweet potatoes with renewed enthusiasm. The brothers’ combine their ingenuity and quirky charm with clever techniques and a modern aesthetic to create an inspiring fresh take on southern cuisine.”
Martha Hall Foose

“Can the words fresh and southern be in the same sentence when talking about food? You bet. This Lee Bros. book is good enough to eat.”
Amy Sedaris


“The southern savants of cooking, Matt and Ted Lee, have updated and simplified all of my favoirite recipes. Their peach tea juleps have found a permanent place on my cocktail party menu.”
Katie Lee Joel