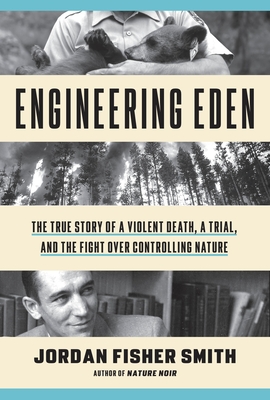 The True Story of a Violent Death, a Trial, and the Fight over Controlling Nature

The fascinating story of a trial that opened a window onto the century-long battle to control nature in the national parks.

When twenty-five-year-old Harry Walker was killed by a bear in Yellowstone Park in 1972, the civil trial prompted by his death became a proxy for bigger questions about American wilderness management that had been boiling for a century. At immediate issue was whether the Park Service should have done more to keep bears away from humans, but what was revealed as the trial unfolded was just how fruitless our efforts to regulate nature in the parks had always been. The proceedings drew to the witness stand some of the most important figures in twentieth century wilderness management, including the eminent zoologist A. Starker Leopold, who had produced a landmark conservationist document in the 1950s, and all-American twin researchers John and Frank Craighead, who ran groundbreaking bear studies at Yellowstone. Their testimony would help decide whether the government owed the Walker family restitution for Harry's death, but it would also illuminate decades of patchwork efforts to preserve an idea of nature that had never existed in the first place.

In this remarkable excavation of American environmental history, nature writer and former park ranger Jordan Fisher Smith uses Harry Walker's story to tell the larger narrative of the futile, sometimes fatal, attempts to remake wilderness in the name of preserving it. Tracing a course from the founding of the national parks through the tangled twentieth-century growth of the conservationist movement, Smith gives the lie to the portrayal of national parks as Edenic wonderlands unspoiled until the arrival of Europeans, and shows how virtually every attempt to manage nature in the parks has only created cascading effects that require even more management. Moving across time and between Yellowstone, Yosemite, and Glacier national parks, Engineering Eden shows how efforts at wilderness management have always been undone by one fundamental problem--that the idea of what is "wild" dissolves as soon as we begin to examine it, leaving us with little framework to say what wilderness should look like and which human interventions are acceptable in trying to preserve it.

In the tradition of John McPhee's The Control of Nature and Alan Burdick's Out of Eden, Jordan Fisher Smith has produced a powerful work of popular science and environmental history, grappling with critical issues that we have even now yet to resolve.

Praise For Engineering Eden: The True Story of a Violent Death, a Trial, and the Fight over Controlling Nature…

“... An intensely reported, rousingly readable and ambitiously envisioned book...This is a book that, while it brims over with descriptions of beautiful places and provides a primer of environmental thought over the past century, weaves together a dramatic court case in Los Angeles, a grizzly-bear attack, and a surprisingly fascinating debate over what constitutes the word ‘natural’ when it comes to national parks, as well as enough characters, complete with back stories, to fill a Leon Uris novel...a thrilling read. Like the best visions for parks, it combines the human and the animal, the managed and the natural, the controlled and the wild.” —Wall Street Journal

“Timely and thoughtful…A vivid account of conflicts within the National Park Service over managing bears and other wild animals—conflicts that contributed to tragic results… Smith’s book will draw you in with his passion, thoughtfulness and first-rate story telling.” —Seattle Times

"[Engineering Eden] is a dramatic, eye-opening chronicle of the struggle to preserve wilderness while making it accessible to the public...A galvanizing stroyteller fluent in the conflict between environmental science and politics, Smith brings every player into sharp and indelible focus as he illuminates the urgent issues national parks grapple with as they struggle to wisely manage predators, invasive species, wildfires, and people." —Booklist, starred review

"A searching study of a tragedy and the legal contest that followed it, one that shaped the course of national park policy in the modern age. Is a natural environment modified by humans still natural? It's not just a question for philosophers...Smith, who understands that nature is 'a web of complex relations,' tells this complicated story clearly and well. Excellent reading for students of park policy, wildlife management, and other resource issues." —Kirkus Reviews

"This meticulously investigated history of Yellowstone and its wildlife management problems should appeal to fans of Jack Olsen's classic Night of the Grizzlies, as well as to readers interested in the broader issue of how much humans should intervene in nature in order to preserve it." —Library Journal

“Engineering Eden is a fascinating book about the relationship between humankind and nature. Jordan Fisher Smith illuminates the often embittered arguments what our role in wilderness should be, and has written a vivid historical account that sheds light on our place in nature’s complex web of life.” —Andrea Wulf, author of The Invention of Nature

“This is a big, ambitious book about a seemingly small, if horrific event—a grizzly devouring a young man. And Jordan Fisher Smith has succeeded in his ambition. He produced a wonderful book, “wonderful” not only because of the quality of the writing, but because the book is filled with wondering; Smith uses that horror as a narrative focal point to explore science, policy making, bureaucracy, ego, even the law, and when he explores something he goes deep.” —John M. Barry, author of Rising Tide and The Great Influenza

“What is ‘nature’? In a narrative delivered with elegance and vigor, Jordan Fisher Smith shows that our answers to this question have life-and-death consequences, for humans and for the ecosystems in which we live.” —David George Haskell, author of The Forest Unseen

“Engineering Eden skates gracefully along the thin line between scholarly and popular writing.  Jordan Fisher Smith’s grasp of the science involved in national park and wilderness management is impressive. So is his ability to tell a compelling story in the tradition of John McPhee and Jon Krakauer. The result is a classic, the literary history of America’s relationship to the natural world.” — Roderick Nash, author of Wilderness and the American Mind

“In 1972 a Yellowstone grizzly killed a young man; from this tragedy a controversy erupted. Can wildlife be managed with no thought for unintended consequences?  Does the Biblical injunction to dominate the earth and its creatures face evolutionary barriers embedded in the randomness of biological life itself?  With open mind and deft narrative, Jordan Fisher Smith probes what is an intractable challenge to environmental stewardship.” —Kevin Starr, author of California and Golden Dreams

“Jordan Fisher Smith’s gripping narrative about the death of a camper mauled by a grizzly, and the trial that follows, poses compelling questions about how to preserve wild nature. Highly recommended.” —Gerald Haslam, author of In Thought and Action and Workin’ Man’s Blues

“A probing look at efforts to manage the “wild” in our fading wilderness - and at the trouble resulting when our guesses are wrong. Engineering Eden is especially timely as we consider our responsibilities to nature on this fast-warming planet.” —Tom Kizzia, author of Pilgrim’s Wilderness

“[A] painstakingly researched…vindication of the Craigheads, who were driven out of Yellowstone…because they refused not to speak out against the Park Service.”—National Parks Traveler Review

“Smith has pulled off an amazing feat: he's made wildlife management urgent and engrossing, writing about it with clarity, depth and a storyteller's pacing…an outstanding introduction to ecological decision-making” —Shelf Awareness

JORDAN FISHER SMITH worked for 21 years as a park ranger in California, Wyoming, Idaho, and Alaska. He has since written for numerous publications including Men's Journal and the Los Angeles Times Magazine, and he is the author of Nature Noir and narrator of the documentary Under Our Skin.
Loading...
or
Not Currently Available for Direct Purchase