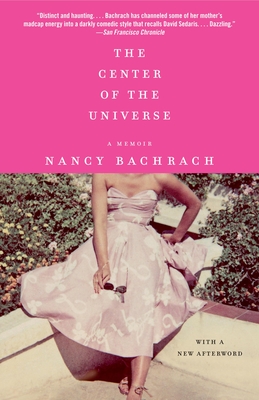 The Center of the Universe

The story is so improbable, it can only be true:  A brilliant woman with a long history of mental illness—who once proclaimed herself to be "the center of the universe" — is miraculously cured by accidental carbon monoxide poisoning aboard the family boat.  Nancy Bachrach warns readers,  “Don’t try this at home” in her darkly humorous memoir about “the second coming” of her mother — the indomitable Lola, whose buried family secrets had been driving her crazy.

Aching and tender, unflinching and wry, The Center of the Universe is a multigenerational mother-daughter story—a splendid, funny, lyrical memoir about family, truth, and the resilience of love.

Praise For The Center of the Universe: A Memoir…

“Distinct and haunting. . . . Bachrach has channeled some of her mother’s madcap energy into a darkly comedic style that recalls David Sedaris. . . . Dazzling.” —San Francisco Chronicle

“Bachrach is one of the funniest writers I’ve ever read, period. Make room on the shelf next to Sedaris, Eggers, Wilsey. Our new bad boy of memoir is here, and she's middle-aged, mildly manic, and, my God, we've been waiting a long time for her.” —Alexandra Fuller, author of The Legend of Colton H. Bryant and Don't Let's Go To the Dogs Tonight

“If there’s a black-comic angle, Bachrach will find it. . . . Bachrach’s book—unsentimental and all the more moving for it—is ultimately about a universal condition: the renegotiation of the adult child’s relationship with her parent.” —The Austin Chronicle

“[Bachrach’s] acidly funny exasperation, her palpable pain, her volatile mixture of love and loathing for what her parents put her and her siblings through feels genuine. And it makes for riveting reading. . . . By the time the book ends, love has conquered chaos, tenderness flows like a healing balm and Lola’s insistence that she is the center of the universe doesn’t seem so crazy after all.” —The Hartford Courant

“You couldn’t make this up. . . . A hilarious account of [Bachrach’s mother’s] recovery . . . from ‘permanent, irreversible’ brain damage.” —The Boston Globe

“Hard to put down: This zany family memoir is the ultimate mother-daughter story.” —Rhode Island Reads

“Every once in a while you come across a memoir that resonates so true to your life that you think, ‘If I were only as witty and charming, I could have written that!’ Even if you are lucky enough not to over-identify with Bachrach’s completely crazy mother, you’re bound to be moved by this terrific book.” —Ayelet Waldman, author of Love and Other Impossible Pursuits

“Dad’s dead, Mom’s comatose: All you can do (mostly) is laugh.” —Newsday

“That [The Center of the Universe] is harrowing isn’t surprising — but that it’s shockingly funny is.” —More

“A delightful memoir of a family’s response to a bittersweet tragedy. . . . Readers will rejoice with the family about the medical miracle that is Lola while laughing about the relative normalcy of a somewhat dotty senior citizen who decorates with frames still displaying the store photos, pitches her walker in a trash bin, and changes light bulbs in her underwear and heels. Readers will also end up loving Lola, and wishing they had a lunch buddy who can tell a funny story like Nancy.” —Curled Up With a Good Book

“[A] sparkling memoir. . . . Vivid and vibrant. . . . Filled with wit and humor. . . . An eminently successful portrayal of a family, effectively combining cleverness with banter and grief with farce to demonstrate the close linkage between comedy and tragedy” —The Jewish Chronicle

“Of the many ways to deal with a father’s sudden death and a mother’s injury and madness, Nancy Bachrach chooses breezy comedy. Like the best of the stand-ups, she pushes the wisecrack and irony to the outer limits in this smart, fast-paced family memoir of disaster.” —Alix Kates Shulman, author of To Love What Is: A Marriage Transformed

“The Center of the Universe is a beautifully written symphony of lunacy and hilarity.  Nancy Bachrach has the comic touch.” —Robert Klein, author of The Amorous Busboy of Decatur Avenue

“Marvelous. . . . A 5-star memoir of a difficult subject.” —Armchair Interviews

“Nancy Bachrach is a sharp observer of all around her and has a piercing ironic humor that serves as a dearly needed life preserver. The Center of the Universe is one of those stories that grabs you by the throat and leaves you proud of our capacity to survive and laugh and enjoy.” —Anne Roiphe, author of Epilogue: A Memoir

Nancy Bachrach worked in advertising in New York and Paris, spinning hot air like cotton candy.  Before that, she was a teaching assistant in the philosophy department at Brandeis University,  where she was one chapter ahead of her class.  She lives in New York City.
Loading...
or
Not Currently Available for Direct Purchase