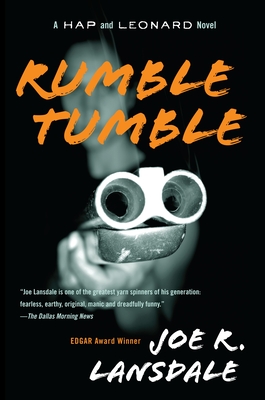 Hap Collins and Leonard Pine are in for an action-packed adventure when they cross paths with a towering Pentecostal preacher, a midget with a giant attitude, and a gang of bikers turned soldiers of fortune.

Even though a midlife crisis just hit Hap Collins like a runaway pickup truck, he's still got his job, he knows his best friend, Leonard Pine, will always be there for him, and of course he's got his main squeeze, Brett Sawyer. Things hit a new low, however, when Brett's daughter, Tillie, who has been walking on the wrong side of the law suddenly stands in need of a rescue. It's won't be easy—it never is—but nothing is going to stop Hap and Leonard as they hit the road destined for Hootie Hoot, Oklahoma to shake things up. And with Hap and Leonard at the wheel this promises to be a wild ride.

"[Joe Lansdale] is one of the greatest yarn spinners of his generation: fearless, earthy, original, manic and dreadfully funny."—Dallas Morning News

"Hilarious. . . .  Addictively scarfable. . . . Two thumbs-up, and pardon the barbecue smears."—Texas Monthly "A master at taking a simple everyday event and turning reality upside down."--Mystery Scene "Hilarious. . . . Lansdale is a terrifically gifted storyteller with a sharp country boy wit."--The Washington Post Book World "Lansdale's prose, both laconic and sarcastic, is so thick with slang and regional accent that it's as tasty as a well-cured piece of beef jerky. Readers will want to savor each bite."—Milwaukee Journal Sentinel "Lansdale has an unsettling sensibility. Be thankful he crafts such wild tall tales."--Chicago Sun-Times "A storyteller in the great American tradition of Ambrose Bierce and Mark Twain."--The Boston Globe "Funny, compulsive . . . enjoyably raffish."—Esquire