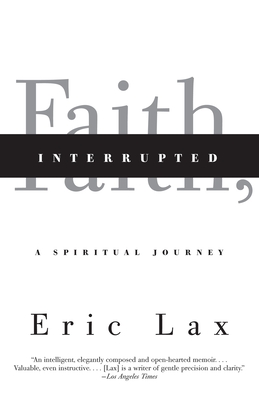 Faith, Interrupted is a profoundly personal, deeply felt exploration of the mystery of faith—having it, losing it, hoping for its return.

The son of an Episcopal priest, Eric Lax develops in his youth a deep religious attachment and an acute moral compass—one that he is willing to go to prison for when it leads him to resist military service in Vietnam. His faith abides until, in his mid-thirties, he begins to question the unquestionable: the role of God in his life. In response, Lax engages with the father who inspired him and with his best friend, a Vietnam War hero turned priest. Their ongoing and illuminating dialogues, full of wisdom and insight, reveal much about three men who approach God, duty, and war in vastly different ways. Lax provides an unusual and refreshing perspective, examining religious conviction sympathetically from both sides as one who has lost his faith but still respects it.

Eric Lax is the author of Conversations with Woody Allen; Life and Death on 10 West (A New York Times Notable Book of the Year); The Mold in Dr. Florey's Coat (A Los Angeles Times Best Book of 2004); and co-author, with A. M. Sperber, of Bogart (nominated for the Los Angeles Times Book Prize in Biography). His biography Woody Allen was a New York Times and international best seller and a Notable Book of the Year. His books have been translated into eighteen languages, and his writing has appeared in The Atlantic, Vanity Fair, Esquire, and The New York Times Magazine. An officer of PEN International, he lives with his wife in Los Angeles.

“An intelligent, elegantly composed and open-hearted memoir. . . . Valuable, even instructive. . . . [Lax] is a writer of gentle precision and clarity.” —Los Angeles Times

“Lax has written a steady, quiet love letter to a faith he has lost. . . . Sympathetic and engrossing.” —The New York Times Book Review

“A poignant, sensitive and thoughtful memoir that illuminates the complexity of the phenomenon that we call faith.” —Karen Armstrong, author of The Case for God

“Candid and heartful. . . . Faith, Interrupted resonates because Lax confronts questions common to believers everywhere, and he does it without pomposity, self-righteousness, or condescension.” —America

“A gentle, rueful book . . . Lax’s polished writing style and lack of assurance that he has all the answers are . . .  definite pluses.” —The Christian Science Monitor

“Lax is a good storyteller, careful with words and reflective of the many ways in which he has had to ponder the eternal questions. This is not a book that ends with faith restored, God in God’s heaven and everything right with the world. But it is a book in which faith is taken seriously and, in the end, respected, even if the author cannot count himself among the faithful.” —Faith Matters

“Insightful. . . . Although this book is as much about a fascinating life as it is about religion, it will appeal to a wide audience both for its engaging subject matter and first-rate writing.” —National Catholic Reporter

“Vietnam . . . was at the core of the experience [Lax] recounts as part of his spiritual journey. . . . This book brings back with warmth, compassion and riveting detail what those days were like. . . . [A] deeply touching and personal meditation.” —The Globe and Mail

“Spiritual memoirs rarely command the same interest to others as they do for their authors, but Lax’s ability as a writer . . . makes his memoir an exception. . . . Lax’s journey, told with a fine sense of narrative shape, is a kind of paradigm of the spiritual struggles of the first wave of the Baby Boom and will speak eloquently to that generation.” —Library Journal

“Eric Lax’s moving and riveting memoir reflects a Christian boy’s struggle with faith and doubt, tradition and discovery.  His encounters with other beliefs reflect as well his sense of empathy for, and solidity with, victims of destiny.” —Elie Wiesel

“Jesus said that he who would save his life must lose it. Does that go for faith, too? Do you have to lose it to save it? If there is any single question that Eric Lax’s luminously honest loss-of-faith memoir most clearly raises, this would be it. We live in two faith cultures. One culture only wants to hear how you lost your faith, the other only how you found it. But some of us have a foot in both cultures: dubious as plain believers, equally dubious as plain unbelievers. Eric Lax’s unfinished, interrupted story is a good one for us, and for better or worse our name is Legion.” —Jack Miles, author of God: A Biography

“In an age when it’s so fashionable to mock religious belief, Eric Lax gives us a quiet, very moving meditation on his own spiritual trials and turns.” —Paul Hendrickson, author, The Living and the Dead