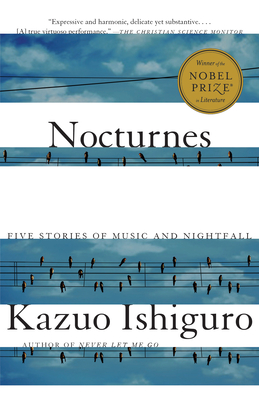 “Each of Kazuo Ishiguro's five short stories stands on its own, but they also read as an ensemble, and their slow and gentle power will carry readers away. The writing is full of heartbreak and loss, full of the sweet music of memory, and full of spare descriptions that paint a picture perfectly. Utterly sublime.”
— Joe Eichman, Tattered Cover Bookstore, Denver, CO
View the List

From the winner of the Nobel Prize in Literature and author of the Booker Prize–winning novel The Remains of the Day comes an inspired sequence of stories as affecting as it is beautiful.

With the clarity and precision that have become his trademarks, Kazuo Ishiguro interlocks five short pieces of fiction to create a world that resonates with emotion, heartbreak, and humor. Here is a fragile, once famous singer, turning his back on the one thing he loves; a music junky with little else to offer his friends but opinion; a songwriter who inadvertently breaks up a marriage; a jazz musician who thinks the answer to his career lies in changing his physical appearance; and a young cellist whose tutor has devised a remarkable way to foster his talent. For each, music is a central part of their lives and, in one way or another, delivers them to an epiphany.

"In both craft and substance Nocturnes reveals a master at work."--Seattle Times

"Ishiguro is, as always, a master of style and tone . . . . [Nocturnes] build[s] into a melancholic soundtrack. We're helpless to do anything but listen."--Time Out New York

“These stories recall Ishiguro's best known novel, The Remains of the Day. . . . By now it is clear that this exquisite stylist is serious in his pursuit of a minimal - perhaps even universal - mode of expression for the emotional experiences that define our lives as human.”—The Times, London

“Superb . . . a deceptively plain and easy style that rides on the surfaces of manners and decorous behavior.”—Providence Journal

"A brilliant new book . . . art, its dangers, its pains and its gaiety [are] all topics seriously considered in this accomplished book."-Frank Kermode, London Review of Books

"Ishiguro blends musical concepts with their literary counterparts in his latest work, and Nocturnes has the . . . quality of a song cycle with recurring themes and motifs developed in different prose keys."--Bookmarks magazine

Kazuo Ishiguro is the 2017 winner of the Nobel Prize in Literature. His work has been translated into more than 40 languages. Both The Remains of the Day and Never Let Me Go have sold more than 1 million copies, and both were adapted into highly acclaimed films. Ishiguro's other work includes The Buried Giant, Nocturnes, A Pale View of the Hills, and An Artist of the Floating World.