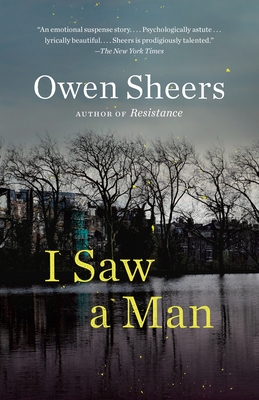 I Saw a Man (Paperback)

After journalist Caroline Marshall is killed by a drone strike in Pakistan, her devastated husband, Michael, leaves their cottage in Wales and moves to London to try to build a new life. There, living in a flat on the edge of picturesque Hampstead Heath, he develops a close friendship with the seemingly perfect family next door, Josh and Samantha Nelson and their two young daughters. The connection fosters the beginning of a healing process, which is disrupted when he receives a letter from the conscience-stricken pilot responsible for Caroline’s death. Still reeling from this stirring of his grief, Michael makes a fatal error of judgment that brings a burden of guilt and a shattering secret into his life. As the tragic consequences of Michael’s loss ripple outward, Owen Sheers’s stunning novel propels us to a conclusion that is both profoundly unsettling and deeply moving.

Owen Sheers is an author, poet and playwright. His first novel, Resistance, was translated into ten languages and adapted into a film. The Dust Diaries, his Zimbabwean nonfiction narrative, was shortlisted for the Royal Society of Literature Onaadtje prize and won the Welsh Book of the Year. His awards for poetry and drama include the Somerset Maugham Award for Skirrid Hill, the Amnesty International Freedom of Expression Award for his play The Two Worlds of Charlie F, and the Hay Festival Medal for Poetry and Welsh Book of the Year for Pink Mist, which was also a Guardian and Observer top ten of the year theater selection. I Saw A Man was short listed for the Prix Femina Etranger. He has been a New York Public Library Cullman Fellow and is currently Professor in Creativity at Swansea University. He lives in Wales with his wife and daughter.

“Immensely pleasurable. . . . This is an exemplary thriller [with] expertly detonated surprises. . . .  A powerful, dark study of brutality, grief and guilt.” —Sunday Times (London)

“Sheers’ language is consistently rich and engaging, precisely calibrated. . . . The characters are complex and fully realized. . . . I Saw a Man treats guilt as a way of seeing, a lens that allows us to recognize otherwise lost bonds.” —Slate

“Gripping and stylish. . . . Sheers’s narrative is one of finely tuned suspense that erupts into visceral drama. . . . But this is also a novel driven by ideas. . . . Bold and satisfying.” —Daily Mail (UK)

“Taut as a thriller, but resonant with motifs of intimacy and distance, guilt and redemption, and the nature of stories and storytelling. . . . It twists and turns and plays its cards close to its chest, showing its full hand only in the final pages, when we are forced to reassess everything that has gone before.” —The Guardian

“Sheers’s thriller is driven as much by subtle ideas as suspense. . . . Psychologically astute.” —The Independent

“A powerful moral thriller. . . . Sheers skillfully drip-feeds the reader his characters’ secrets and lies, including a remarkable sequence leading up to the book’s central, shocking moment of revelation. I Saw a Man’s ending is similarly bravura, elegantly throwing into new light much of what has gone before.” —Literary Review

“Manages to capture the rhythms, and fragility, of love and family; Sheers is quietly moving on the timeless topic of grief. . . . Sheers really does pull off the oft-trumpeted blending of the personal and political.” —Independent on Sunday