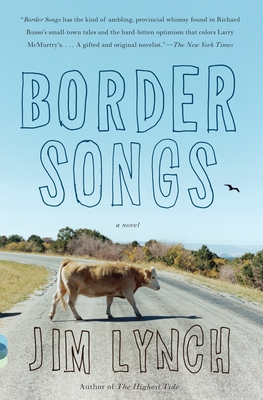 “Jim Lynch's latest novel is marvelous -- it inspires delight and wonder in the natural world, illuminates the follies of border rivalries and drug wars, and examines the vagaries of small town life through the experiences of Brandon Vanderkool, a beguiling amateur naturalist whose severe dyslexia makes him an unlikely border patrolman. This is a funny, sweet, yet cautionary tale for our time.”
— Mary Gleysteen, Eagle Harbor Book Company, Bainbridge Island, WA
View the List

Set in the previously sleepy hinterlands straddling Washington state and British Columbia, Border Songs is the story of Brandon Vanderkool, six foot eight, frequently tongue-tied, severely dyslexic, and romantically inept. Passionate about bird-watching, Brandon has a hard time mustering enthusiasm for his new job as a Border Patrol agent guarding thirty miles of largely invisible boundary. But to everyone’s surprise, he excels at catching illegal immigrants, and as drug runners, politicians, surveillance cameras, and a potential sweetheart flock to this scrap of land, Brandon is suddenly at the center of something much bigger than himself.

A magnificent novel of birding, smuggling, farming and extraordinary love, Border Songs welcomes us to a changing community populated with some of the most memorable characters in recent fiction.

“[Border Songs] has the kind of ambling, provincial whimsy found in Richard Russo's small-town tales and the hard-bitten optimism that colors Larry McMurtry's. . . . A gifted and original novelist.” —The New York Times

“Wonderfully quirky, all-too-human, tender and uproarious. . . .  His characters are achingly real and remarkably communal in their shared sense of one another. . . . This is a splendid, funny, remarkable novel.” —Providence Journal

“A beautifully written novel, hilarious and tender, with rich descriptive passages. . . . A joyful song to the survival of nature and the young at heart.” —The Washington Times

“Wonderful. . . .  Lynch portrays Brandon with such tenderness and humor that you can’t help but fall in love with him. . . .  Tender, sad and leavened with wit.” — The Washington Post

“One of the more inventive and unique novels of recent years. . . . A book that goes by all too quickly.” —The Pittsburgh Tribune-Review

“Border Songs is a fable of innocence lost, or at least misplaced, and Brandon is one of the most remarkable characters created by a Northwest author in recent memory. . . . Lynch observes like a journalist and writes like a poet. . . . [He] brings a depth of knowledge and an attention to detail that should be the envy of more ivory-tower writers.” —The Seattle Times

“A narrative tilt-a-whirl.” —The Plain Dealer

“It takes a special kind of wordsmith to create a character like Brandon—and, indeed, to craft his whole supporting cast, who are by turns ordinary and ornery (in a way that might remind you of Northern Exposure). . . . [Lynch’s] turns of phrase are as light as a feather, but so precise and purposeful that you’ll quickly find yourself buoyed by the vistas they show you.” —Louisville Courier-Journal

“A sort of Empire Falls along the 49th parallel where failing farms and sleepy towns are being crowded out by tribal casinos and upscale subdivisions. [Border Songs] is fascinatingly close look at the confluence of small-town life, the global drug trade and illegal immigration, and it places Jim Lynch at the forefront of Northwest writers to watch.” —Willamette Week

“Enthralling. . . . A startling look at this country’s far Northwest corner with a compelling cast of oddballs. . . . Lynch’s deep empathy for his characters, no matter how off-kilter, is . . . powerful.” —The Daily Beast

“A free-ranging tale that brings together the world of pot, human smuggling, art and love like never before. There is humor and pathos, irony and genius in this intimate look at one community struggling to reinvent itself in the wake of 9/11.” —Grand Rapids Press

“[Border Songs’s] hero is an imaginative tour de force. Lynch’s comic borderland is not only palpable, it is richly metaphoric. Comparisons with Ken Kesey and Tom Robbins are not only inevitable, they are welcome.” —The Globe and Mail (Canada)

“[Lynch] tells his story with remarkably clear prose punctuated by a sort of well-informed wink at the ridiculous attitudes on both sides of the border.” —BookPage

“An unusual love story and a novel of hope.” —Daily American

“There’s no great mystery to Border Songs—just a slice of life in a small border town, with people confronted by problems they must find ways to fix. In Brandon Vanderkool, Jim Lynch has given us a delightfully memorable character. . . . A darned good read.” —Bookreporter

“With [an] unlikely hero and his supporting cast of odd ducks, author Lynch spins a tale that investigates how political posturing from on high affects the common folk, skewering the attitudes and cringe-worthy jingoism of the post-9/11 paranoia.” —The Bellingham Herald

“A wonderful and important read. . . . Lynch has a delightful satirical yet human touch in the way he tells us about this border culture, a subject rarely explored in literature.” —Vancouver Sun

“Marvelous, funny, and gentle.” —The Spokesman-Review

“Jim Lynch masterfully tiptoes the line between delicate observation and satire with unexpected humor, all the while following the coming of age story of an unlikely hero.” —The National Post (Canada)

“Whimsical, sensitive and full of heart. . . . The sense of place the author creates is only possible through humility, a slowed-down attentiveness and sensitivity to nature.” —Cascadia Weekly

“The quirky, colorful characters that populate Border Songs fill this book with charm, but it is misfit Brandon Vanderkool and his obsession with birds that enables the novel to take flight.” —Curled Up With a Good Book

“Jim Lynch’s new novel reads as an antidote to the 21st century: a kind of metaphorical insistence on hope and simplicity and art in the face of a surrounding storm.  Border Songs is a quietly ambitious book and it just gets better as it rises to the final satisfying image.” —Kent Haruf, author of Plainsong

Jim Lynch lives with his wife and their daughter in Olympia, Washington. As a journalist, he has received the H. L. Mencken Award and a Livingston Award for Young Journalists, among other national honors. His first novel, The Highest Tide, won the Pacific Northwest Booksellers Award, appeared on several bestseller lists, was adapted for the stage and has been published in eleven foreign markets.
Loading...
or
Not Currently Available for Direct Purchase