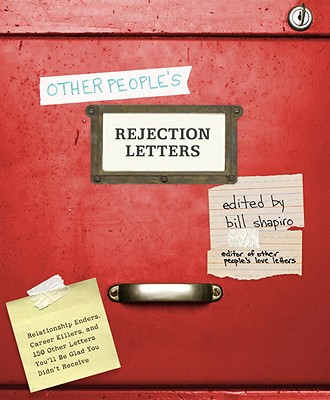 Relationship Enders, Career Killers, and 150 Other Letters You'll Be Glad You Didn't Receive

Welcome to the rejection-letter hall of fame, where the hopes and dreams of celebrities (Jimi Hendrix, Andy Warhol, among others) are crushed alongside the aspirations of the rest of us. You’ll find handwritten notes from former lovers, nasty e-mails from would-be bosses, heated texts, crayon scrawlings, and surprising dismissals from Playboy, Disney, even the pope. To unearth this collection, Bill Shapiro searched America’s desk drawers, hard drives, and government files. But what at first seems to be a voyeuristic jaunt through other people’s flops is ultimately a testimony to everyone who has at least tried. And while rejection’s sting is painful, it is not lethal; here, you’ll see that one of the great universals is not only people’s desire for acceptance but also their ability to persevere.

BILL SHAPIRO is the editor in chief of LIFE.com and the former editor of LIFE magazine. He lives in Brooklyn, New York.


Praise For Other People's Rejection Letters: Relationship Enders, Career Killers, and 150 Other Letters You'll Be Glad You Didn't Receive…

"’A rejection letter can sway or scar a life,’ writes editor Bill Shapiro, ‘causing one person to give up his dreams, another to work harder.’  They’re no fun either way, but after reading the examples in his new book, at least you’ll know you’re not alone."  - People

"A collection of more than 150 notes, letters, and telegrams that will make you feel good about yourself." – Esquire.com

"Bill Shapiro shares 150 nay-saying (and jaw-dropping) messages that’ll take the sting out of your own recent burns, spurns, and turndowns" – More Magazine

"The native Angeleno and editor of Life.com must have rifled through lots of desk drawers (and government files) to come up with these: nasty emails, angry texts, and dismissals of both the famous (like Andy Warhol and Jimi Hendrix) and non-famous alike – and they’re funny because they’re not ours." – LAmag.com

“A great gift for anyone who has ever heard a resounding no.” -- AllYou.com

BILL SHAPIRO is the editor in chief of LIFE.com and the former editor of LIFE magazine. He lives in Brooklyn, New York.
Loading...
or
Not Currently Available for Direct Purchase