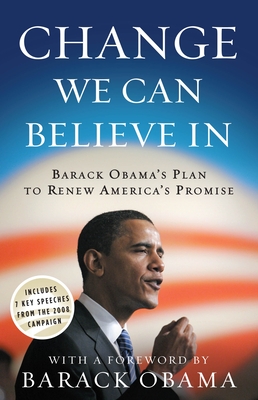 Change We Can Believe In

The election of Barack Obama as President of the United States is a defining moment in American history. After years of failed policies and failed politics from Washington, this is our chance to reclaim the American dream. Barack Obama has proven to be a new kind of leader–one who can bring people together, be honest about the challenges we face, and move this nation forward. Change We Can Believe In outlines his vision for America.

In these pages you will find bold and specific ideas about how to fix our ailing economy and strengthen the middle class, make health care affordable for all, achieve energy independence, and keep America safe in a dangerous world. Change We Can Believe In asks us not just to believe in Barack Obama’s ability to bring change to Washington, it asks us to believe in our ability to change the world.

BARACK OBAMA was elected President of the United States on November 4, 2008. He is the author of the New York Times bestsellers Dreams from My Father and The Audacity of Hope: Thoughts on Reclaiming the American Dream.
Loading...
or
Not Currently Available for Direct Purchase