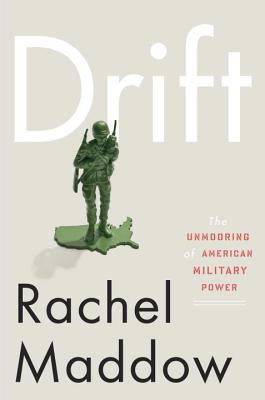 The Unmooring of American Military Power

The #1 New York Times bestseller that charts America’s dangerous drift into a state of perpetual war.

"One of my favorite ideas is, never to keep an unnecessary soldier," Thomas Jefferson wrote in 1792. Neither Jefferson nor the other Found­ers could ever have envisioned the modern national security state, with its tens of thousands of "privateers"; its bloated Department of Homeland Security; its rust­ing nuclear weapons, ill-maintained and difficult to dismantle; and its strange fascination with an unproven counterinsurgency doctrine.

Written with bracing wit and intelligence, Rachel Maddow's Drift argues that we've drifted away from America's original ideals and become a nation weirdly at peace with perpetual war, with all the financial and human costs that entails. To understand how we've arrived at such a dangerous place, Maddow takes us from the Vietnam War to today's war in Afghanistan, along the way exploring the disturbing rise of executive authority, the gradual outsourcing of our war-making capabilities to private companies, the plummeting percentage of American families whose children fight our constant wars for us, and even the changing fortunes of G.I. Joe. She offers up a fresh, unsparing appraisal of Reagan's radical presidency. Ultimately, she shows us just how much we stand to lose by allowing the priorities of the national security state to overpower our political discourse.

Sensible yet provocative, dead serious yet seri­ously funny, Drift will reinvigorate a "loud and jangly" political debate about how, when, and where to apply America's strength and power--and who gets to make those decisions.

Rachel Maddow has hosted the Emmy Award-winning "Rachel Maddow Show" on MSNBC since 2008. Before that, she was at Air America Radio for the duration of that underappreciated enterprise. She has a doctorate in politics from Oxford and a bachelor's degree in public policy from Stanford. She lives in rural western Massachusetts and New York City with her partner, artist Susan Mikula, and an enormous dog.

Praise For Drift: The Unmooring of American Military Power…

"Thank Ms. Maddow for picking this and every other fight that Drift provokes. It will be a smarter public debate than the kinds we're used to."
--Janet Maslin, New York Times


"A biting, bracing tour of the rise of American military bloat...Her fix-it ideas aren't facile or smiley-faced. They are a coda to the serious project she's taken on--a project that both plays to her persona and gives it new gravitas...Rachel, if you can get those ideas a serious hearing, you will be much more than TV's funniest wonk."
--Emily Bazelon, Slate.com

"Maddow’s distinctive voice in Drift is highly intelligent, often incredulous and intermittently and humorously profane...Her thesis, which is passionately and effectively articulated, remind[s] us of how far we have drifted from linking the sacrifices of our armed forces around the world to the citizens at home they so selflessly serve… Maddow…[has] provided readers with a timely and perhaps necessary provocation to examine the far-reaching consequences of the American way of war."
--Gordon M. Goldstein, Washington Post

"Even though she's an ideological broadcaster, Maddow doesn't resort to demonization and hyperbole. It makes her case much stronger."
--Conor Friedersdorf, TheAtlantic.com

"Lively but serious...This book is a reminder that before Maddow became a face on nighttime television, she was a Rhodes scholar who earned a doctorate in politics at Oxford. But Drift is not heavy reading, and her cheerfully snarky voice is instantly recognizable...A thought-provoking and timely book."
--Scott Shane, New York Times Book Review

"Full of head-smacking stories about America's military meddling and muddling...Maddow sounds an alarm this country needs to hear more than almost any other."
--Catherine Lutz, San Francisco Chronicle

“Provocative...Asks fundamental questions about the process by which the U.S. now goes to war that pretty much never get asked by the media.”
--Wired.com

"Thoroughly researched...Written in her signature broadcast style--provocative, satirical, passionate-bordering-on-outrage...Progressive fans of her show may already know what to expect. Yet the book still surprises."
--Minneapolis Star Tribune

“Engaging but sobering...With the same kind of substance, wit and charge that make her TV show a top-rated Emmy winner, Maddow details how dubious wars, the exploding "privatization" of the military and a superfunded, superpowered security leviathan have drained our resources...Sometimes it takes a gutsy, determined woman--a Nellie Bly, Rachel Carson, Ida Tarbell, Elizabeth Neuffer, Molly Ivins or Rachel Maddow--to hang a literary lantern on a revolting situation.”
--Austin American-Statesman

"Drift is infused with Maddow’s sharp wit and her vast political knowledge. She dexterously reveals how we became the nation that spends more money on militarism then all other nations combined...“The path to American amnesia is worth recalling on this Memorial Day,” wrote Tom Englehardt. If you want to jog your memory, I encourage you to dive into Maddow’s brilliant testament to remembering."
--MsMagazine.com

"Drift is a provocative, important book that displays all the qualities of its author: intelligence, humor, depth, and originality. Maddow raises vital questions about how the American ways of war have changed and endangered our democracy, but she does so without cant or predictability. America’s most charismatic liberal has crafted here an argument for skepticism about our military-industrial complex that will persuade many conservatives--a remarkable achievement."
--STEVE COLL, author of Ghost Wars

“With her savage wit, dazzling command of facts, and eye for the absurd, Maddow tells the epic story of how American warfare came to be both never-ending and practically invisible. In the process, she revives a radically old-fashioned idea: waging war should be wrenchingly difficult for a nation, for that is what prevents unnecessary battles from being waged. This courageous book deserves to spark a national debate about the purpose of war.”
--NAOMI KLEIN, author of The Shock Doctrine

“In Drift, Rachel Maddow brings her passion, wit, cool common sense and intellectual firepower to the epic and darkly farcical story of how America has declined into an overfunded and unchecked national security state--one that inflicts more damage on America’s assets, our military included, than it does on our adversaries. At a crossroads when Americans of all stripes are rethinking their country’s priorities, Maddow’s compelling take on how we drifted into the costly habit of perennial war--and how we might yet reverse it--could not be more timely.”
--FRANK RICH, writer-at-large, New York magazine

"Written with the flair for scintillating satire that has endeared Rachel Maddow to liberals and moderates alike--and infuriated neo-conservatives, evangelicals, and some tea partiers--Drift is funny, rich, and right. But at its end, when you put it down, you will be troubled. We are losing our republic and Ms. Maddow tells you why."
--LAWRENCE WILKERSON, Professor of Government and Public Policy at the College of William and Mary and former chief of staff to Secretary of State Colin Powell

“America is in urgent need of a real debate over its addiction to sprawling militarism and endless war. It affects, and degrades, every aspect of national life: political, cultural, and economic. Nobody is better positioned to trigger that debate than Rachel Maddow, and that's exactly what she does in this startlingly insightful and well-written book. By stripping away the propaganda that distorts national security policy and laying bare its reality, Maddow has written one of those rare political books that can transform Americans' understanding of what their government is actually doing.”
--GLENN GREENWALD, columnist for Salon and author of Liberty and Justice for Some

“Rachel Maddow's Drift is a long overdue and provocative examination of the abuses, excesses and just plain foolish elements in our national security systems. These are issues that deserve our attention.
--TOM BROKAW, NBC News Special Correspondent and best-selling author of The Greatest Generation

“Drift never makes the case that war might be necessary. America would be weakened dramatically if we had underreacted to 9/11. However, Rachel Maddow makes valid arguments that our country has been drifting towards questionable wars, draining our resources, without sufficient input and time. People who like Rachel will love the book. People who don’t will get angry, but aggressive debate is good for America. Drift is a book worth reading.”
--ROGER AILES, Chairman and CEO, FOX News

“Drift is a serious and carefully-conceived piece of investigative reporting, illuminating a subject--the vast and mostly secret militarization of our society--that most Americans have no idea of, thanks in large part to the failure of many high-profile journalists to discuss it. Rachel has once again broken the mold and she should be immensely proud of this book, which is written in the same bright, clear, engaging style she brings to broadcast television.”
--MATT TAIBBI, author of Griftopia

“In Drift, people who love Rachel Maddow will discover that her gift for finding amazing anecdotes and funny, revealing details totally translates to the page. People who hate her may be surprised by how often in Drift she espouses some of the most conservative values: a suspicion of big government and unbridled federal power, a zeal to cut wasteful spending and a yearning to return to the intentions of the Founding Fathers.”
--IRA GLASS, host of public radio’s “This American Life”

“Brilliant book. Drift will stun Americans with its portrait of a hyperventilating United States that has produced too many real live Dr. Strangelove moments. Drawing from thoughtful, national interest-driven conservatives and not just the liberal establishment, Maddow makes the case that what ought to be a strong nation is instead risking shipwreck, by letting war and military matters escape real political and economic gravitational forces. Every page informs and angers at the same time.”
--STEVE CLEMONS, Washington editor-at-large, The Atlantic