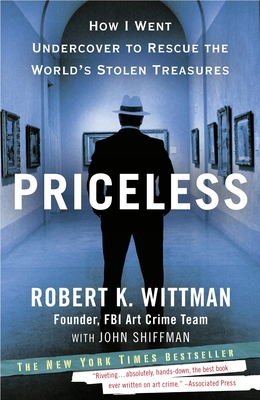 How I Went Undercover to Rescue the World's Stolen Treasures

The Wall Street Journal called him “a living legend.” The London Times dubbed him “the most famous art detective in the world.”

In Priceless, Robert K. Wittman, the founder of the FBI’s Art Crime Team, pulls back the curtain on his remarkable career for the first time, offering a real-life international thriller to rival The Thomas Crown Affair.

Rising from humble roots as the son of an antique dealer, Wittman built a twenty-year career that was nothing short of extraordinary. He went undercover, usually unarmed, to catch art thieves, scammers, and black market traders in Paris and Philadelphia, Rio and Santa Fe, Miami and Madrid.

In this page-turning memoir, Wittman fascinates with the stories behind his recoveries of priceless art and antiquities: The golden armor of an ancient Peruvian warrior king. The Rodin sculpture that inspired the Impressionist movement. The headdress Geronimo wore at his final Pow-Wow. The rare Civil War battle flag carried into battle by one of the nation’s first African-American regiments.

The breadth of Wittman’s exploits is unmatched: He traveled the world to rescue paintings by Rockwell and Rembrandt, Pissarro, Monet and Picasso, often working undercover overseas at the whim of foreign governments. Closer to home, he recovered an original copy of the Bill of Rights and cracked the scam that rocked the PBS series Antiques Roadshow.

By the FBI’s accounting, Wittman saved hundreds of millions of dollars worth of art and antiquities. He says the statistic isn’t important. After all, who’s to say what is worth more --a Rembrandt self-portrait or an American flag carried into battle? They're both priceless.

The art thieves and scammers Wittman caught run the gamut from rich to poor, smart to foolish, organized criminals to desperate loners.  The smuggler who brought him a looted 6th-century treasure turned out to be a high-ranking diplomat.  The appraiser who stole countless heirlooms from war heroes’ descendants was a slick, aristocratic con man.  The museum janitor who made off with locks of George Washington's hair just wanted to make a few extra bucks, figuring no one would miss what he’d filched.

In his final case, Wittman called on every bit of knowledge and experience in his arsenal to take on his greatest challenge: working undercover to track the vicious criminals behind what might be the most audacious art theft of all.

Praise For Priceless: How I Went Undercover to Rescue the World's Stolen Treasures…

“Almost every case he recounts has enough intrigue and suspense for a Hollywood screenplay.”--The Washington Post

"A rollicking memoir... investigative details dazzle... PRICELESS can read at times, not unpleasantly, as if an art history textbook got mixed up at the printer with a screenplay for THE WIRE."--The New York Times

“I can’t think of a better title for a book than this one, PRICELESS.  Because this non-fiction story is priceless, a spellbinding narrative of an FBI agent’s journey into the crazy murk of what is perhaps the most fascinating criminal activity of all, high-stakes art theft into the millions upon millions.”--Buzz Bissinger, New York Times bestselling author of FRIDAY NIGHT LIGHTS and coauthor of SHOOTING STARS

"Entertaining...crime buffs will receive a painless education while they enjoy a lively account of art thieves and the man who pursued them."--Kirkus Reviews

"Wittman's memoir, PRICELESS, is a fast-paced, gripping narrative of stolen national treasures and those who traffic in them. An undercover lawman armed with wit and adrenalin, Wittman exposes the darkest corners of the art world and brings to justice the dangerous criminals who lurk there."--Laney Salisbury, co-author of PROVENANCE: HOW A CON  MAN AND A FORGER REWROTE THE HISTORY OF MODERN ART

"In one riveting sequence after another, Robert Wittman reveals the art world’s underbelly as it has never been seen, through the eyes of an undercover agent whose investigative acumen is matched only by his art-history chops. A true page-turner."--Benjamin Wallace, New York Times bestseller author of THE BILLIONAIRE’S VINEGAR

“With suspense, intrigue, and candor, FBI agent Robert Wittman takes us inside the secret world of stolen art as he goes undercover to solve some of the most notorious art thefts of our time.”—Ronald Kessler, New York Times bestselling author of THE BUREAU and IN THE PRESIDENT’S SECRET SERVICE

“PRICELESS is a gem of a story, part James Bond, part art history.  If Robert Wittman didn’t already exist, Dan Brown would have made him up.”--George Anastasia, New York Times bestselling author BLOOD AND HONOR, THE LAST GANGSTER and THE SUMMER WIND

"More realistic than THE THOMAS CROWN AFFAIR, more entertaining than CATCH ME IF YOU CAN.  It's hard to believe one undercover FBI Agent rescued so many cultural and national treasures......but it's all true.”--Jack Garcia, former FBI undercover agent and New York Times bestselling author of MAKING JACK FALCONE

“PRICELESS is a rare and riveting journey into the little-understood world of art crime.  A brilliant professional who sees both the big picture and all of its nuances, Wittman fascinates with tales of his daring adventures as an FBI undercover agent.  Demonstrating candor, humor, integrity, and sensitivity, Wittman strips away the myths, bares the truth, and tells it like it is.  He and PRICELESS are both precisely that--priceless!”--Andrea Kane, New York Times bestselling author of DRAWN IN BLOOD

ROBERT K. WITTMAN spent twenty years as an FBI special agent. He created and was senior investigator for the bureau’s Art Crime Team. Today, he is president of the international art security firm Robert Wittman Inc.

JOHN SHIFFMAN is an investigative reporter at The Philadelphia Inquirer. He has won numerous writing awards and was a 2009 finalist for the Pulitzer Prize.
Loading...
or
Not Currently Available for Direct Purchase