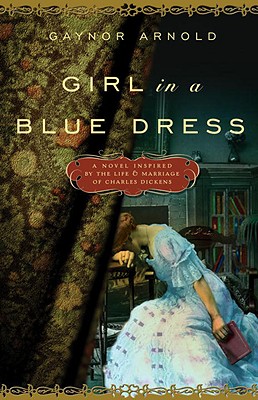 Girl in a Blue Dress

A Novel Inspired by the Life and Marriage of Charles Dickens

At the end of her life, Catherine, the cast-off wife of Charles Dickens, gave the letters she had received from her husband to their daughter Kate, asking her to donate them to the British Museum, “so the world may know that he loved me once.” The incredible vulnerability and heartache evident beneath the surface of this remark inspired Gaynor Arnold to write Girl in a Blue Dress, a dazzling debut novel inspired by the life of this tragic yet devoted woman. Arnold brings the spirit of Catherine Dickens to life in the form of Dorothea “Dodo” Gibson–a woman who is doomed to live in the shadow of her husband, Alfred, the most celebrated author in the Victorian world.

The story opens on the day of Alfred’s funeral. Dorothea is not among the throngs in attendance when The One and Only is laid to rest. Her mourning must take place within the walls of her modest apartment, a parting gift from Alfred as he ushered her out of their shared home and his life more than a decade earlier. Even her own children, save her outspoken daughter Kitty, are not there to offer her comfort–they were poisoned against her when Alfred publicly declared her an unfit wife and mother. Though she refuses to don the proper mourning attire, Dodo cannot bring herself to demonize her late husband, something that comes all too easily to Kitty.

Instead, she reflects on their time together–their clandestine and passionate courtship, when he was a force of nature and she a willing follower; and the salad days of their marriage, before too many children sapped her vitality and his interest. She uncovers the frighteningly hypnotic power of the celebrity author she married. Now liberated from his hold on her, Dodo finds the courage to face her adult children, the sister who betrayed her, and the charming actress who claimed her husband’s love and left her heart aching.

A sweeping tale of love and loss that was long-listed for both the Man Booker Prize and the Orange Prize, Girl in a Blue Dress is both an intimate peek at the woman who was behind one of literature’s most esteemed men and a fascinating rumination on marriage that will resonate across centuries.

Praise For Girl in a Blue Dress: A Novel Inspired by the Life and Marriage of Charles Dickens…

“Arnold’s knowledge of Dickens is impeccable, and she uses fiction to give Mrs. D. what she never had–a chance to interview her husband’s mistress and reclaim her beloved children. Beautifully written, entirely satisfying.”
—The Times (London)

“A fine work of imagination and compassion that offers up other ways for us to understand a popular genius and those who loved him.”
—Telegraph

“Fabulously indulgent . . . a lovely, rich evocation of the period that rises above the faintly damning ‘historical fiction’ label with its complex characterization and silky prose. A neat rendering of a celebrity marriage with all the pressure and expectation that courting fame invites.”
—The Observer

“A fascinating portrait of a Victorian woman in the near-impossible position of maintaining a sense of self while married to a famous, difficult, and wildly charismatic genius.”
—Metro

“With his manic energy and flamboyant waistcoats, Gibson is a Dickensian character–and no wonder, for Arnold’s inspiration for her wholly absorbing novel lies in the complex married life of Charles Dickens and his wife, Catherine.”
—Daily Mail

“I could not put down this compelling and beautifully written novel. A young girl falls wildly in love with a brilliant, sensual writer. As the years pass, he becomes a genius adored by all Victorian England though in his personal life he turns against her, banishing her from him and their children when he falls in love with someone younger. Slowly she calls upon the greater power of ordinary real love in the face of genius and moves forward to take back her life. I cheered for her on every page of this deeply touching story.”
—Stephanie Cowell, author of Marrying Mozart

"Arnold paints a vivid picture of the breakdown of a marriage, the selfish demands of creativity, the suffocating confines of Victorian society, and the complex bonds between men and women. Her compassion for all of her characters, no matter how flawed or unsympathetic, makes for utterly compelling reading."
—Elizabeth Hickey, author of The Wayward Muse

GAYNOR ARNOLD is a first-time novelist who lives in England.
Loading...
or
Not Currently Available for Direct Purchase