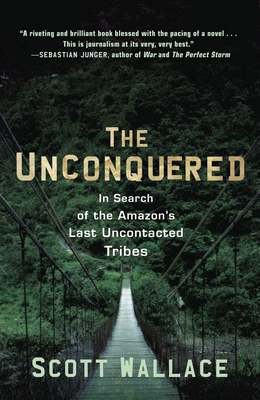 In Search of the Amazon's Last Uncontacted Tribes

The extraordinary true story of a journey into the deepest recesses of the Amazon to track one of the planet's last uncontacted indigenous tribes.

Even today there remain tribes in the far reaches of the Amazon rainforest that have avoided contact with modern civilization. Deliberately hiding from the outside world, they are the last survivors of an ancient culture that predates the arrival of Columbus in the New World. In this gripping first-person account of adventure and survival, author Scott Wallace chronicles an expedition into the Amazon’s uncharted depths, discovering the rainforest’s secrets while moving ever closer to a possible encounter with one such tribe—the mysterious flecheiros, or “People of the Arrow,” seldom-glimpsed warriors known to repulse all intruders with showers of deadly arrows. On assignment for National Geographic, Wallace joins Brazilian explorer Sydney Possuelo at the head of a thirty-four-man team that ventures deep into the unknown in search of the tribe. Possuelo’s mission is to protect the Arrow People. But the information he needs to do so can only be gleaned by entering a world of permanent twilight beneath the forest canopy.

Danger lurks at every step as the expedition seeks out the Arrow People even while trying to avoid them. Along the way, Wallace uncovers clues as to who the Arrow People might be, how they have managed to endure as one of the last unconquered tribes, and why so much about them must remain shrouded in mystery if they are to survive. Laced with lessons from anthropology and the Amazon’s own convulsed history, and boasting a Conradian cast of unforgettable characters—all driven by a passion to preserve the wild, but also wracked by fear, suspicion, and the desperate need to make it home alive—The Unconquered reveals this critical battleground in the fight to save the planet as it has rarely been seen, wrapped in a page-turning tale of adventure.


Praise For The Unconquered: In Search of the Amazon's Last Uncontacted Tribes…

"Wallace's gripping account takes us upriver to a place very few outsiders have ever seen." – The Boston Globe

"What a great book! An adventure story worthy of Joseph Conrad or Peter Matthiessen." – The Oregonian

“It’s easy to picture The Unconquered being made into a movie.” – Washington Post Express

“An eye-opening read…one of the most gripping pieces of non-fiction around…. You’ll swear you are reading a thriller novel.” – Guernica

“Dream assignment or nightmare? An editor from National Geographic asked journalist Scott Wallace to join an expedition into the deepest wilds of the Amazon jungle to find the mysterious ‘People of the Arrow.' While the experience was pretty much a nightmare, it’s a blessing for readers of Wallace's fascinating book.” — Associated Press

“Echoing Amazonia’s earliest European explorers, Wallace crafts a tale that is part gripping adventure story, part window into the unexpected complexities of a developing country where uncontacted tribes stand between a resource-hungry economy and an area abounding in natural wealth.” – Indian Country Today

“Wallace joins the tribe of jungle-besotted literary types led by Redmond O'Hanlon and David Grann and presents a credibly incredible tale about his voyage past the edge of modernity.” – Huffington Post

"A gripping tale of adventure." – Washingtonian

“While it’s hard to imagine that ‘stone-age’ tribes still persist in a world of cell phones, satellites and social media, it’s even harder to understand how difficult it is to police these isolated regions, to keep them free of outsiders who could endanger a way of life that has nearly disappeared…Wallace’s narrative is apt and penetrating.” – SEJournal

SCOTT WALLACE is a journalist whose assignments have taken him from the Himalayas and the streets of Baghdad to the Alaskan Arctic and the Amazon. A former correspondent for the Guardian and Newsweek, he has written for National Geographic, National Geographic Adventure, and Harper’s. His photography has appeared in Smithsonian, Outside, and Sports Afield. His television credits include CBS, CNN, and National Geographic Channel.
Loading...
or support indie stores by buying on