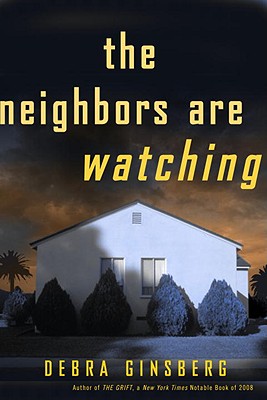 The Neighbors Are Watching

“Set against the backdrop of the devastating 2007 wildfires that forced the evacuation of thousands of San Diego residents, The Neighbors are Watching shows the dark and dirty side of 'white picket fence' suburban life. This is a captivating domestic drama filled with flawed characters, all with secrets to hide. After reading this novel you will ask yourself, Who knows what goes on in people's homes when there are no neighbors watching?”
— Karin Beyer, Saturn Booksellers, Gaylord, MI
View the List

Set against the backdrop of the deadly 2007 wildfires that forced the evacuation of half a million San Diego residents, Debra Ginsberg’s new novel, The Neighbors Are Watching, examines the dark side of suburbia—a place where everyone has something to hide.

Aside from their annual block party, the neighbors on Fuller Court tend to keep to themselves—which doesn’t mean that they aren’t all watching and judging each other on the sly. So when pregnant teenager Diana Jones shows up, literally, on her biological father's doorstep, the neighbors can't stop talking. Joe Montana is a handsome restaurant manager who failed to tell his wife Allison that he fathered a baby with an ex-girlfriend seventeen years ago. Allison, already harboring her own inner resentments, takes the news very badly. She isn’t the only one. Diana's bombshell arrival in their quiet cul-de-sac sets off a chain reaction of secrets and lies that threaten to engulf the neighborhood along with the approaching flames from two huge wildfires fanned by the Santa Ana winds.

A former reality TV contestant who receives a steady stream of gentlemen callers at all hours, two women forced to hide their relationship in order to keep custody of their children, a sanctimonious housewife with a very checkered past, and a family who nobody ever sees—these are just a few of the warring neighbors struggling to keep up appearances and protect their own interests. But when lovely, troubled Diana disappears in the aftermath of the wildfire evacuation, leaving her newborn baby and many unanswered questions behind, the residents of Fuller Court must band together to find her before all of their carefully constructed deceptions come unraveled.

A potent blend of domestic drama and suspense, The Neighbors Are Watching reveals the secrets that bloom alongside manicured flowerbeds—and the truths that lurk behind closed doors.

Praise For The Neighbors Are Watching…

"Keen and ruthless observations of human foibles." – New York Times Book Review
"Neighbors offers the kind of reading that'll keep you up all night…If there is any literary justice, Ginsberg soon will be a huge star. This might be your last chance to say, ‘I knew her when.’" – Dallas Morning News

"Immensely talented...Ginsberg gets all the suburban details right...the suspense and tension keep tightening and building to a shocker at the end, which shows that home may be where the heart is, but it’s also where the secrets are." —Boston Globe

"In this explosive, heat-driven melodrama, the mistakes of a misguided teenager establish once again that what goes around, comes around...edgy, bracing and inventive." —CurledUp.com

"Ginsberg's writing is undeniably compelling, attracting that part of us that draws closer and closer to a horrible car accident, fearing the horrors we may find and yet needing to sate our curiosity."—Associated Press

"The characters in Debra Ginsberg's new book have a lot of turmoil below the surface of their cul-de-sac existence." —San Diego Union Tribune

"As you might expect, nothing is as it seems. Everyone has deep, dark secrets." —North County Times

“A gripping suburban suspense novel with real people at its core. This will appeal to fans of domestic suspense (by, e.g., Mary Higgins Clark, Lisa Gardner) as well as Tom Perrotta's suburban exposés.” —Library Journal

“Fans of Desperate Housewives will enjoy Ginsberg’s engaging…mix of domestic drama and psychological suspense…Everyone is a suspect here; even seemingly upstanding citizens have closets bulging with skeletons…deliciously flawed characters.” —Booklist

"An immensely interesting novel, The Neighbors Are Watching just may cause readers to look more closely out of their own windows." —BookPage

“Unusually seductive…Read it for the not-so-predictable deceptions and the ghostly elusiveness of love.” – O, The Oprah Magazine

San Diego-based writer DEBRA GINSBERG is the author of the memoirs "Waiting, Raising Blaze, " and "About My Sisters, " as well as two novels, "Blind Submission" and "The Grift, " which was a 2008 Notable Book selection by "The""New York Times."
Loading...
or
Not Currently Available for Direct Purchase