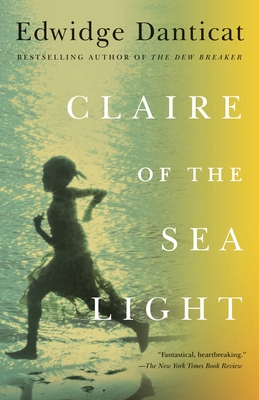 From the national bestselling author of Brother, I’m Dying and The Dew Breaker: a “fiercely beautiful” novel (Los Angeles Times) that brings us deep into the intertwined lives of a small seaside town where a little girl, the daughter of a fisherman, has gone missing.

Just as her father makes the wrenching decision to send her away for a chance at a better life, Claire Limyè Lanmè—Claire of the Sea Light—suddenly disappears. As the people of the Haitian seaside community of Ville Rose search for her, painful secrets, haunting memories, and startling truths are unearthed. In this stunning novel about intertwined lives, Edwidge Danticat crafts a tightly woven, breathtaking tapestry that explores the mysterious bonds we share—with the natural world and with one another.

Praise For Claire of the Sea Light (Vintage Contemporaries)…

“Luminous. . . . Danticat’s determination to face both light and dark brings the story to life. But her skill as a writer makes the balancing act a pure pleasure to read. . . . [She] is a beautiful storyteller.” —The Miami Herald

“Danticat has created a pulsing world. . . . On these pages, the human heart is laid open and the secret contents of its chambers revealed in all their beauty and agony. . . . Haunting.” —O, The Oprah Magazine

“A revealing portrait that mixes a touch of magic with the tough reality of life in Haiti.” —NPR

“Haunting. . . . Writing with lyrical economy and precision, Ms. Danticat recounts her characters’ stories in crystalline prose that underscores the parallels in their lives.” —The New York Times

“Vivid and intensely personal. . . . Danticat has been fixing and unfixing her native country since the appearance of her first book. . . . She is a writer . . . inhabited, a writer dedicated to opening her reader’s eyes to something she keeps trying to see for herself.” —San Francisco Chronicle

“The biggest questions of life flow from the pen of this brilliant novelist. In Claire of the Sea Light, Danticat folds the story into a package so preciously tight that we can tuck it in our hearts and keep it close and warm.” —Nikki Giovanni

“[Has] the feel of a fairy tale. But its ethereal qualities are offset by its stark portrayal of life in small-town Haiti; the combination makes for a lovely book.” — New York magazine

“Danticat’s language is unadorned, but she uses it to forge intricate connections. . . . The dexterity of her sympathy is an even match for her unflinching vision.” —The Boston Globe

“In a voice tuned to the frequency of sorrow, with a calmness that neither apologizes nor inflames, [Danticat] lays out the terrible choice that many in Haiti have faced: Keep a child in deepest poverty or offer the child to someone with better prospects. . . . A remarkably well-plotted combination of mystery and social critique.” —The Miami Herald

“Danticat has a way of making small lives tell big stories. . . . The stories of the inhabitants of Ville Rose fold into one another in surprising ways; social barriers exist but are constantly transgressed—sometimes violently, sometimes with compassion and mutual understanding.” —Public Books

“[An] extraordinary talent in full flower . . . . There’s a Faulknerian quality to Claire of the Sea Light . . . showing how human stories and lives ramify through and across each other in ways both touching and tragic.” —The Huffington Post

“Haunted by ghosts and grief, lifted by magic and love. . . . Danticat paints each of her characters and their town with vivid detail and lyrical language. . . . [Claire of the Sea Light] is lit with its own inextinguishable glow.” —Tampa Bay Times

“It’s the core human struggles that make it impossible to put the novel down. . . . [Danticat] brilliantly sheds light on an array of human issues with sexuality, identity, politics, class. . . . A heartfelt journey.” —New York Daily News

“Masterful. . . . With Claire of the Sea Light, Danticat stuns us again.” —Harvard Review

The opening chapter of Claire of the Sea Light moves backward chronologically through each of Claire’s birthdays, ultimately returning to the present day of the narrative. How does this structure contribute to the book’s sense of time overall, and to its weaving of past and present as more characters are introduced?

What does it mean that Albert Vincent is both the town of Ville Rose’s undertaker and its mayor? How are these dual roles reflected in his relationship with Claire Narcis, Nozias’s wife and Claire’s mother, when she works for him preparing bodies for burial?

That Claire visits her mother’s grave on her birthdays brings poignantly to the fore the notion that life and death are intertwined. In what other ways does that happen in the book? Do ghosts—or chimè—have a positive or negative influence over the living?

The sea both opens and closes the book, offering powerful images of its destructive and restorative force: the fisherman Caleb is drowned at the book’s beginning when “a wall of water rise[s] from the depths of the ocean, a giant blue-green tongue” (3), and at the book’s end, Max Junior is spat back from the sea that had “taken [him] this morning” (237). What roles does the sea play in the fates of all the characters in the book? What other myths, stories, and fables come to your mind by this book’s evocation of water?

At one point in the story, Nozias recalls another watery scene, when he and wife Claire Narcis went night fishing, and Claire slipped into the moonlit water to observe a school of shimmering fish. It is from this moment that their daughter, and Danticat’s book, get their name. How does this important memory shape your impression of Claire Narcis, including in what we learn about her by the book’s conclusion?

The relationships between parents and children take many forms in the book’s three main families. Claire and Nozias remain at the center, showing how both parent and child experience joy and fear, trust and wariness. How is this theme expanded upon by bonds between Max Sr. and Max Junior, Max. Junior and Pamaxime, Madame Gaëlle and Rose, and even Odile and Henri? In each of these, who, if any, suffers more: parent or child?

Madame Gaëlle’s story (“The Frogs,” 41) opens with a description of a sudden explosion of frogs that has plagued Ville Rose, which her husband Laurent explains “is surely a sign that something more terrible is going to happen” (44). The smell of the frogs’ corpses at first nauseates the pregnant Gaëlle, yet the act of putting a frog in her mouth seems to save her baby from risk. How does this miracle, along with the simultaneous death of Laurent, reflect the town’s mythic culture and one woman’s sense of her fate?

Much of the lyricism and power of Claire of the Sea Light derives from the descriptions of its Haitian setting: of the sea, the mountains, the flowers, the “sparkly feathers from angel wings” that Claire searches for after her waking dreams (236). Would the book work in any other place, either in the Caribbean or beyond? How might things change if so?

Although this is fiction, Danticat vividly evokes present-day Haitian culture and society, including its poverty (5), gangs, and restavèk children—the child-servitude that Nozias fears for Claire. How do these realities affect your reading of the book and the sense of authenticity of Claire’s story? Of Bernard’s?

The radio is a major form of communicating stories throughout the novel, and the radio station is a place where confessions and revelations are spoken, but also where betrayals, and even murder, occur. Why do you think Danticat chose to set so many key scenes at the radio station? Louise George is the host of a radio show called Di Mwen, which translates to “Tell Me.” Does honest speech come more naturally in this medium where the speaker’s face is hidden? In what ways is Danticat’s book in and of itself like a radio show?

Claire of the Sea Light is rich with secrets: of paternity, of sexual identity, of crimes, of lies that unfold in the course of the narrative. How do the multiple voices of the book help withhold the truth, yet also expose it at key moments? In what cases does not knowing the entire truth of a situation—such Nozias’s plan to have a vasectomy, Max Junior’s love for Bernard, and Albert Vincent’s for Claire Narcis—hurt or protect the person keeping the secret, and the person from whom the truth is kept?

Danticat chooses to tell her story through multiple voices and points of view, which provides the reader with a kaleidoscopic view of the past. How does this also affect the book’s presentation of memory, and of our ability to shape certain memories that may not be our own?

In the scene where Nozias leaves his goodbye letter for Claire with Madame Gaëlle, both characters seem to hesitate in their willingness to participate in Nozias’s decision to leave. How do their interactions in this moment reflect their unique understandings of their responsibilities, and also of death and the future? What makes Nozias turn to Gaëlle in particular, and what motivates Gaëlle to take in a new daughter after she’s lost her own? Is money the most important thing to have, in raising a child, in offering him or her security and love?

Although Claire Limyè Lanmè is the book’s fulcrum, her point of view does not appear until the final chapter. Does it seem that Claire accepts her fate and her father’s decision? How does placing those other stories before Claire’s affect your feelings about her in the final scene? What do you imagine will happen to Claire in the future?

The choice Nozias faces—whether or not to leave his child in the care of another—is one that many real parents in Haiti struggle with today. Does this knowledge change your understanding of the book, or your sympathies with Nozias? What would you do if you were in Nozias’s position?