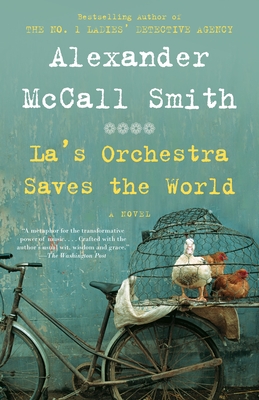 “As WWII begins, Lavender Stone's life in London comes to an abrupt end when she learns that her husband has run off with another woman. Seeking refuge in the countryside, Lavender (La to her friends) moves into her father-in-law's house in Suffolk, where, among other things, she starts an orchestra -- and discovers a friendship that proves to be the most important thing to her in a world turned upside down. You will adore this story.”
— Ann Holman, The King's English, Salt Lake City, UT
View the List

A heart-warming stand alone novel about the life-affirming powers of music and company during a time of war, from the best-selling and beloved author of The No.1 Ladies' Detective Agency.

When Lavender, La to her friends, moves to the Suffolk countryside, it’s not just to escape the London Blitz but also to flee the wreckage of a disastrous marriage. But as she starts to become a part of the community, she detects a sense of isolation.  Her deep love of music and her desire to bring people together inspire her to start an orchestra.  Little did she know that through this orchestra she would not only give hope and courage to the people of the community, but also that she would meet a man, Feliks, a shy upright Pole, who would change her life forever.


Praise For La's Orchestra Saves the World: A Novel…

"A metaphor for the transformative power of music.... crafted with the author's usual wit, wisdom and grace."
--Washington Post

"A big story about love, death, identity and music."
—The Lincoln Journal Star

"McCall Smith's characters are well-drawn and alive. . . . A satisfying work by a writer . . . who charms many readers."
--Providence Journal

"Delightful . . . McCall Smith once again creates unforgettable characters and a story that will resonate with readers across generations . . . A fresh and unforgettable story about the power of human kindness. Highly recommended."
—Booklist (starred review)

"The evocation of war-torn England, with its palpable mood of defiance, determination and survival, is beautifully caught . . . An excellent recreation of a woman of her time."
—The Scotsman

"Unlike anything else in McCall Smith's work."
—The Independent

"Alexander McCall Smith writes about the enduring, patient qualities of love . . . The novel pays heed to our national yearning for a story to chew on."
—The Times (London)

"A gentle and uplifting read."
—The Daily Mail

Alexander McCall Smith is the author of The No. 1 Ladies' Detective Agency series, the Isabel Dalhousie series, the Portuguese Irregular Vers series, and the 44 Scotland Street Series. He is professor emeritus of medical law at the University of Edinburgh and has served on many national and international bodies concerned with bioethics.  He lives in Scotland.
Loading...
or support indie stores by buying on
(This book is on backorder)