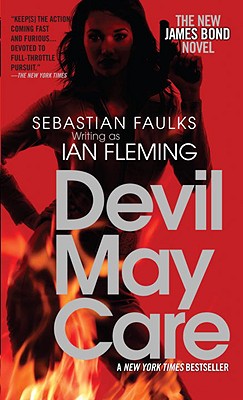 Bond is back in this electrifying new novel of intrigue and suspense.

An Algerian drug runner is brutally executed on the desolate outskirts of Paris and 007 is assigned a new task; to shadow the mysterious Dr. Julius Gorner, a power-crazed pharmaceutical magnate. Alongside a glamorous Parisian named Scarlett Papava, Bond must stop a chain of events that will lead to global catastrophe.


Praise For Devil May Care…

“A satisfying thriller. . . . A fond and at times funny homage to all the other books in the series.”
—The New York Times

“Superior.... The book races along. Unlike many modern novels, it gets better and better.”
—The Economist

“Well-written [and] entertaining.... The tension ratchets up.”
—The Wall Street Journal

“Goes down as easily as one of 007’s bon mots.”
—The Christian Science Monitor

“So satisfying was Sebastian Faulks’s new James Bond novel that I felt obliged to celebrate by making myself a vodka martini, very dry, shaken, not stirred.”
—Fritz Lanham, Houston Chronicle

“Faulks is a graceful writer with a bracing cold streak and a sharp eye for period detail.”
—Time

“Has admirable style and verve, in large part because Faulks approaches the material with respect, never winking at the reader.”
—The South Florida Sun-Sentinel

Sebastian Faulks's seven previous novels include the international bestseller "Birdsong "(1993), "Charlotte Gray (2000), "and most recently "Engelby" (2007). He lives in London, is married and has two sons and a daughter. "From the Hardcover edition."
Loading...
or
Not Currently Available for Direct Purchase